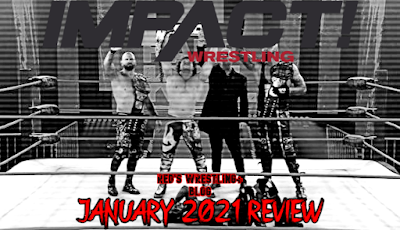 IMPACT Wrestling has continued their uphill battle of righting their wrongs for another month. While I'd argue that they've been a top three US based promotion for years, they still have that stink on them from when they turned away so many of their fans while mocking them for leaving. As a result, even with their alliance with AEW, it constantly feels like no matter what they do, most fans still refuse to give them a chance. While I refuse to stan for any company these days, I still want them to do well simply because of the amazing talent they are home to and the fact that not everyone can work for WWE and AEW, despite how their bloated rosters might suggest otherwise. Those dudes and dudettes deserve better and have been working their asses off without much praise for so long now. I see no chance of the company dying anytime soon and anyone that ever predicts such a thing is always proven wrong, but I still don't see them climbing up the ranks much, either.

It is what it is.

So, lets take a look at the five matches from them that caught my eye for the first month of the year.

Up first, Blake Christian and Ace Austin in the Super X Cup Finals from Genesis. Losing track of what made the company special and making the X-Division a poorly defined division years ago was always one of their biggest mistakes. They've largely fixed most of that, though not completely, and this match serves well to showcase what the X-D is these days. Not only was it a fun spotfest and very good match in general, but I hope it serves as a reminder to those backstage that a well defined division is the heart and soul of IMPACT.

The other match from Genesis saw Moose and Mack work an I Quit match. While the gimmick is always a bit funny when compared to standard matches, I try to lean into them anyway and they tend to be fun as a result. Moose and Mack put in for a much better match than expected, too. Good spots, solid story work, and overall a great match that overdelivered and featured a decent finish. Worth a click.

Over to Hard to Kill, we start with Manik defending the X strap against Bey and Raju. The story of TJP/Manik that was sold here was hokey af and the unmasking was weak, feeling like an off brand version of El Despy's from last year. Still, everyone looked good here, the match was sincerely recommendation levels, and this was another quality X-Division match with some creativity to boot.

Up next, Eddie and Sami had a super fun death match. Bloody entertainment and a nice display of fighting spirit. I had decent expectations here and it delivered. I still hope to see more IMPACT/AEW crossover stuff ASAP, maybe with the pending invasion after Rebellion, and would love Sami/Mox in one of these matches as a result.

Lastly, Kenny and the Good Brothers against Moose, Swann, and Sabin. This is the one with Omega coming out in the Halloween Bullet Club shirt and Anderson and Gallows also wearing the mark, giving New Japan some free PR. It got a decent buzz and eventually the "forbidden door" situation took place after, though with little follow up. Nagata and Mox look to be up next but the partnership is far from what folks wanted and expected. I'd add that the IMPACT/AEW deal has been rather uneven as well. Regardless, this match in a vacuum rocked. Honestly, I'd argue that Moose stepped up the most and that, with his match above with Mack, he deserves credit for his work this month. Omega was, of course, awesome, too. Fantastic, six-man action with perfect pacing and the IMPACT Match of the Month!

Content-wise, IMPACT was enjoyable this month with five worthwhile matches featuring 14 different dudes. Sure, the commentary was iffy at times, but there's clearly still shit worth checking out from the brand and these five should serve as a nice starting point for those that missed them.

February to come asap as well as other content, of course.

Thanks for reading and consider checking out Omega/Swann tonight!