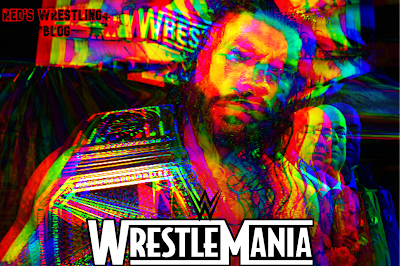 The National Anthem of night one was preferable in my opinion. I also saw clips of the Fiend/Orton match which was interesting if nothing else. While Bray's workrate tends to be on the weaker end, not that he's not capable of solid outings, his stuff tends to focus more on horror plotlines which sadly have been hit or miss. The visual of Bliss at the end was badass at least.

The first pull saw Owens put down Sami with a stunner. They obviously have a long history of excellent matches together but sadly this wasn't one that hits that mark. Good for what it was and they largely utilized their time well, but it was still too short and felt far too much like a random televised contest than a WrestleMania one.

The second pull was also disappointing and just felt off. Asuka is one of the best women's wrestlers ever and Rhea can be pretty enjoyable against the right person. Here, it never clicked fully for me and stayed outside of recommendation levels overall. While good and largely enjoyable, I expected far more considering the talent involved and the stage that it took place on.

I luckily wasn't struck out to close this review though, as the main event rocked. Jey's involvement was logical and largely kept to a minimum but that's still basically my biggest knock here. It was a truly fantastic thrill ride of action and drama as they built the excitement up to the satisfying finish. Everyone looked great here and the right person won, as Roman really should remain champion for a very, very long time. Borderline MOTYC.

I preferred night one overall based on the match pulls, but I strongly recommend the main event at the very least, presuming you missed it.

Some content from Hardcore Justice next and then a review of the last episode of #SNSM (before moving to Mondays) and We are STARDOM!! reviews should be next up.