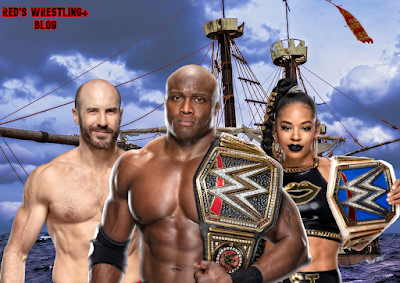 Matches from WrestleMania 37 Night One

The national anthem was enjoyable enough.

The first thing I saw on the show after that was Lashley and Drew for the WWE Championship. I had moderate expectations but they honestly overdelivered and felt more like something from Impact ~2017, in a good way. Not only was it a great, physical match but I was pleasantly surprised at the outcome. VKM can be very sporadic but keeping the belt on Lashley right now was really the best move. I'm unhappy with the split of Hurt Business and his new alignment with King Potato, but the dude is more motivated than ever and putting on nice displays. Drew's reign as champ was enjoyable but I'm wanting more of Lashley as top dog and it's luckily just getting started.

Next, Cesaro and Seth in a "get them on the card somehow" match. Thanks to this being a Mania match, where wrestlers tend to pull out "new" moves, we had Cesaro breaking out the UFO which was awesome. Sincerely. And while I can't say the match itself was great, it was still a very enjoyable and entertaining contest between the two and good enough for a recommendation. Cesaro picking up a victory on this stage is worth seeing if nothing else, of course. Note that fans in Florida cannot count worth a damn, but having lived there for a bit I cannot say I'm very surprised.

Celebrities working matches is almost always a bad thing for wrestling fans. It brings in casuals and outsiders and might make for a tiny boost in views but most of those tuning in just laugh at the clip and move along. There are exceptions of course. Bad Bunny has been an interesting one. His merch sold super well, he seemed motivated and even appeared on SNL with the 24/7 belt, and honestly I thought the buzz was worth noting. While I'm not big on his music, it's undeniable that he's a popular dude. I give him major props for the work he has put in and it paid off nicely here, with almost everyone I know giving approval including fans and workers. Now, I didn't watch the match itself but I did catch clips of the dude in action. I'll say that and yeah, the guy clearly loves the industry and put in some work to make it come off well. Thumbs up. If you're a fan of Bad Bunny, watch it. If not, still consider it for shits and giggles even if some are bitching that it "ruins wrestling". Props if nothing else.

Closing night one, Sasha Banks put the Smackdown Women's Championship on the line against Royal Rumble victor, Bianca Belair. Admittedly, I was unsure how this would go quality-wise. Sasha is one of my favorites ever, so I had no doubt she'd work her ass off. Belair, on the other hand, had never shown me much. Sure, she had some entertaining aspects about her but in all the matches I've seen with her I never was blown away. I was pretty surprised to see WWE going all in on her at the start of the year and even more surprised they were giving her half the spot main eventing the first night of Mania. She shut me the fuck up. I was beyond impressed with her shows of strength and athleticism here and by the time we got half-way in I was sold. By the time the bell rang to close the match, which saw Belair walk out SmackDown Champion, I was a fan. Sasha was awesome, Bianca was awesome, the match was fantastic, and I have nothing bad to say about any of this. Make time for this one.

Now, for some negative that I feel is needed.

There are already cases coming out of this recklessly ran show, and it's not really all that surprising. I have seen numerous pictures of not just maskless fans in attendance, but fans and wrestlers walking around without masks all around town, backstage, etc. A reminder that there is no such thing as a moral billionaire, that VKM allegedly bribed a politician to allow them to run during a pandemic, that the company reported record growth, signed a huge deal with NBC, and still fired folk once again during a pandemic because of "budget cuts". WWE is a logo. If you want to see that as representation of the talent alone that's fine, but there's a good argument to be made that it's nothing more than a logo version of VKM. Don't stan a logo nor a billionaire that would just as easily toss you aside. WWE doesn't care about quality, opinions, or doing the right thing because this is a capitalist society that they are working in and they've got their $. Very few promotions handled the pandemic properly but WWE was easily one of the worst. I think they should be called out on that often.

As always, thanks for reading. Night two will be up soon.