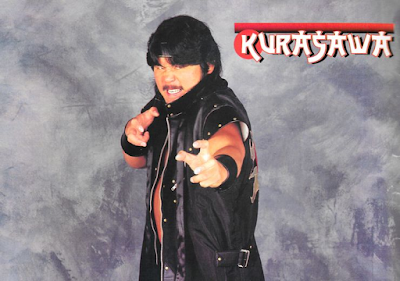 Make sure grandma is off the toilet because I'm back with another Nitro review!

The opener was average but the good news is that Wright won against the debuting Disco Inferno and honestly it was decent for an opener especially considering the names.

Next, Hogan, in a neck brace, cut a promo backstage. Clearly he was actually offended by the "licking his wounds" stuff from last week as he referenced it here. He put over The Giant a tad while also mocking him and then challenged him to a....sigh....monster truck match. Listen, the 90's were fucking weird. He also said he's putting the belt on the line after on the same show (Halloween Havoc).

Next, Mean Gene and Savage are in the ring to continue the drama between Macho Man and Luger. Lex ran in early in, they both rambled, and then the match that was seemingly teased for this episode was announced instead for the next week. Luger added that if Randy wins that Luger will forfeit his random, unearned title shot versus Hogan to him AND will leave the company to go back to playing with children. Remember, Luger is tired of playing with kids though and wants big boys now.

I'm expected a dq finish in that one. No way Savage wins either way.

Manabu, when he could still move, was up next in a match that overdelivered in my opinion. The pace was brisk but that worked here. Pittman is one of the weakest members of the roster but looked okay here simply because of K. Entertaining stuff for sure and I am hoping this goes somewhere.

Pillman and Arn join Gene in the ring next for a quick promo reminding us that they are not done with Flair. It was okay.

Someone then lit a fire in a dumpster and sent it to the ring for Savage versus Taskmaster. The good news is it was kept super short. It wasn't even a match as much as it was a building block recklessly put down. Savage won by dq when the Doom Goons fucked around. He looked fucking stupid in the L but it is the same dude that eliminated himself in a Rumble...

The Giant came off like a star here, at least, as he murdered everyone that came to try to stop him. Luger met a similar fate, setting up a situation where he came into the main event selling the choke slam.

Luger and Meng was basically rest holds and then the latter used the spike to win the match. It wasn't good at all and the booking logic on this episode dropped considerably during the second half. Literally the only good thing that happened during the end stretch was The Giant looking like a fucking monster. Everything else was iffy at best and train wreck at worst.

The wrestling this week was largely weak. There were things I liked, but the second half dropped the entire thing down to the point that the whole episode suffered. I get what they were trying for here, but they failed more than they succeeded here.

Episode 5 looks much better and I'll be watching, reviewing, and posting it next Monday!