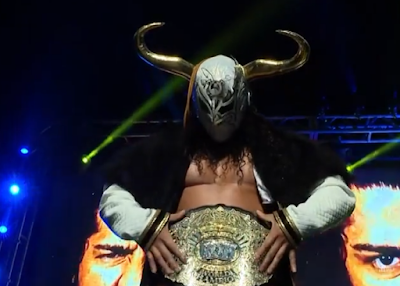 With this, I am up to March with ROH coverage and I am already caught up on AEW. I must say, Ring of Honor hasn't seemingly been getting a lot of attention of late but I've enjoyed everything I've seen from them since their relaunch late last year.

The show opened with a decent set of packages, even though the two LFI ones contradicted themselves a bit. Despite the results of the openers, I feel King might be splitting sometime this year.

Up first in-ring on this special edition, The Foundation defended the World Tag Team Championships against LFI in a pure rules match. Dragon Lee and King were cocky and inexperienced with the rule set and burned through their rope breaks but they dug into their bag of tricks to eventually took down Gresham and Lethal to win the belts. While I am unsure on the change, the match was fairly good and set a tone for the evening in general so there's that. My main issue here was more the pacing of the thing but the new champs should make for several decent matches.

Lethal and Rush/Taylor for the next feud.

The Taylor promo on why he should be champion was awesome.

They need to stop teasing that matches might go over the TV time limit, by the way. If they actually allow it to happen, it'd undermine the episode and take away trust. It'd hurt the series that finally is on a groove. Also, since I don't see it happening, hopefully, it largely just undermines the Honor Club purpose, too. Just my two cents.

But yea, the issue with this main event is that Taylor is on such a roll right now and falling here hurts momentum a bit. Him winning the six-man belts should have happened the week after. They made him look strong af here for sure which helps, at least. And, to be clear, I agree with the outcome at least because Rush should certainly hold that belt for a much longer run this time around. I fear with La Sombra now set to be free from WWE that Rush and crew might leave for AEW but booking them strong might instead bring Almas to ROH instead. I prefer that. Sure, a Sombra/Fenix match would rock, but that roster is so bloated that they'd be more faces in a crowd at this point. Past that, the match here in question was good. I could have done without the ref bump and stuff, but it is what it is.  After the bump, Bestia brought his son a chair. King came out seemingly to stop him, as teased at the top, but then took down Taylor with it himself solidifying his spot in the unit. Rush quickly beat him after to retain. I see that their thinking here was to make King's place in LFI more solid, make Shane look strong even in defeat, and keep Rush as champ. There are better ways but I get it.

So, while nothing on this hit recommendation levels, everything was almost to that point and really the entire hour was pretty well done either way. Any nitpicks I have are largely dustbin worthy and I honestly think this would be a good reentry point for previously disenfranchised fans. If you have stayed away from ROH for a while but are finally interested again, go ahead and pull the trigger.