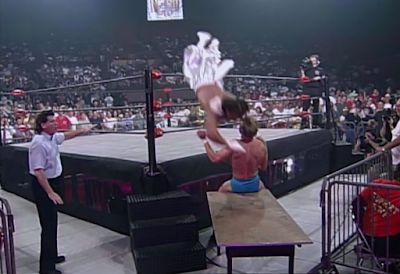 Matches:
1.Sabu vs Wright **1/2
2.WCW US Title: Sting(c) vs Wallstreet *3/4
3.Norton vs Savage **1/4
4.WCW World Title: Hogan(c) vs Luger **
Thoughts:
This edition kicked off with a recap of last week's terrible Hogan/Luger cut and then they announced that Vader was no longer involved in the upcoming Fall Brawl.
Up first for the in-ring content, Sabu debuted against Alex Wright. They had a decent match where they tried to squeeze as much as possible into under five minutes. Despite the fact that this was meant to be a big debut for Sabu, he was easily outclassed by Wright here, though. The match ended with Alex kicking out after three which was interesting. Post, Sabu put AW through a table which saw the ref overturn the decision and take the W from Sabu.
Mean Gene is out next in the ring with Flair. Ric cut a promo on his feud with Arn before Lex walks out for a cup of coffee that saw Flair brag about how awesome he was. Luger simply told him he was "too much" and laughed him off before walking back to the back randomly. That was messy as fuck.
Fans during this show plugged ECW in the crowd a bit which was funny.
Wallstreet is in action next and they use him and the match to dog on WWF and VKM. I'm not big on them either and during this time watching Raw was a chore but maybe don't laugh when using a dude as average as IRS. The match was below average and Sting couldn't even make it worthwhile.
The next match wasn't too bad, at least. Norton looked like a beast and Savage sold it very well. The finish was weak but I can see why they did it. The popsicle line on commentary had me laughing. I'd like a clean rematch soon.
The main event remained and they keep making Luger sound like a pedo. There was some no selling from the two to sell the story. It wasn't much overall but sold a bigger match later well enough as well as the upcoming Fall Brawl show thanks to the DQ finish. I liked the tensions after, with Savage and Hogan questioning Luger. Sure, the segment was a bit cheese but it is what it is and was entertaining nonetheless.
While this episode was a step down from the first one, it was still an entertaining hour of television at the very least. None of the matches are worth seeing on their own though and I'd likely recommend just finding a highlights reel or reading this review and moving along honestly. While entertaining for what it was I don't see it being something I remember a few months from now and there are better uses of an hour.
Overall Rating: 55/100%
Red's Reviews Throwback Reviews Wrestling