Throwback Reviews: Out The Sky (ECW) 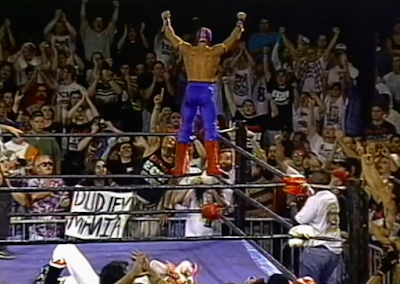 Match from ECW Hardcore TV #127:
1.Rey Misterio Jr vs Psicosis ****
Thoughts:
Malenko, Benoit, and Guerrero having just left a hole in ECW, saw some plaster put over the spot with the debut of AAA standouts, Rey Misterio Jr and Psicosis! Remember, it was shortly after this that WCW decided to start officially setting the ground work for a cruiserweight division, too. The entire thing was a fantastic, balls to the wall, high octane spotfest and another example of an iconic match that would serve as a trendsetter for what US wrestling would move to. Misterio and Psicosis started their path to excellence, sadly mainly just in the case of the former, and it holds up amazingly even today. It's must-see for sure!
As an added bonus, the episode this is from ended with Austin mocking Hogan in a very funny promo. Check that out, too!
Red's Reviews Throwback Reviews Wrestling