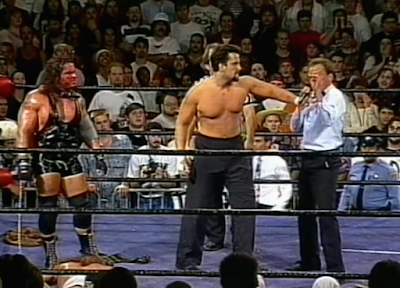 This one started with another amazing promo from Foley. The dude was pure magic on the mic and this is one of his all time best pieces. Artful shit and goosebump inducing.

The Pitbulls next suggest that if they fail tonight that they'll leave the business. Oh, and Big Dick Dudley was hit by a truck but the truck was hurt more. In the fourth promo of the night, Dreamer responded to Foley, selling the idea that ECW is a movement and that he is one of its' beacons forward; that the roster and fans deserve respect and he's going to beat it into him and Raven, too.

A VERY 90's music video package of the Cactus/Raven/Dreamer angle plays before we're introduced to Dances With Dudley. This show can be a trip.

The sole match of the evening saw Raven and Richards defending the hot potatoes against The Pitbulls. At the start, Raven came out alone with Beulah because "Stevie had a broken arm" and they added a 2/3 falls stipulation. #1 took off instead of just standing alone doing nothing and came back later with Richards, noticeably without a broken arm, connected with a dog collar and bleeding. Was he supposed to be afraid or was he delayed because he was taking a shit? Oh, or did he pull a Goldberg and bust his head open before and they wanted to storyline it? Anyway, this was a big, ugly, bload soaked, over-booked, super fun brawl. Sloppy? Sure. Great car crash entertainment? Also true. It was a fucking circus act match but I couldn't look away.

This episode overdelivered. The promos rocked and the sole match of the installment was worth seeing.