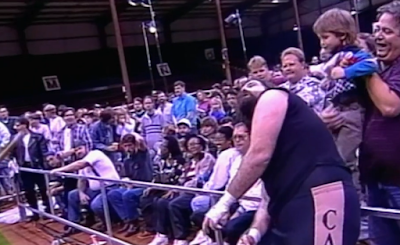 Those ECW shirts that Sandman wore with the politically incorrect shit on the back were cringeworthy. I bet folks that wore that crap own shit like this now.

At one point, Foley hit Sandman with a table like it was a chair so there's that. A moment later, Sandman nearly struck a kid with a cane. Crazy shit as you'd expect given the participants. This one was from Florida despite what cagematch suggested, by the way. They battled around the arena, throwing shots, weapons, and dropping blood. It ended with a damn sunset flip ringside with Foley jumping off the apron of all fucking things.

Post, Joey told us that they'd air the next chapter on the next episode and that Sandman had suffered a concussion and that he would be out injured for a while.

In all, it was a fun but average level match. Jack was of course the star.