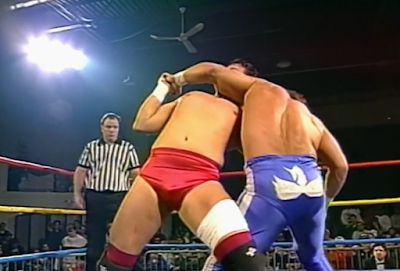 Match from ECW Harcore TV #94:
1.Benoit vs Snow ***1/2
Thoughts:
Working along, this match certainly caught my eye as Benoit was admittedly a technical ace and Snow an underrated performer in his own right.
Funny enough, a lot of things I see old guard asshats bitching about these days I am seeing on display in these old 90's matches, too. I've seen no selling on Nitro, super kicks just being random attacks, etc. People really just love to complain.
There was a decent ebb and flow here with Al showing some heart throughout before Pegasus Kid put him away. For a throwaway it was pretty dang fun match and I love the technical matches that ECW has on these episodes. Benoit was being booked pretty well too and post he continued to attack, requiring Snow to be taken out on a stretcher.
I also watched the photo clips after of Public Enemy dropping the belts in a Double Table match to Sabu and Taz. It sounded like a train wreck but an entertaining one and the right team won. After, Benoit came out for a badass spot. A promo from Chris was aired after with him calling out Sabu. Great shit.
Watch this match if you get a chance!
Red's Reviews Throwback Reviews Wrestling