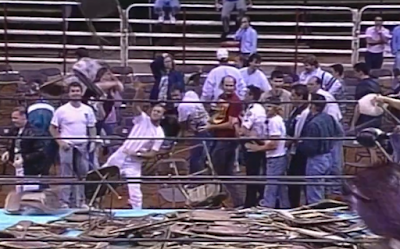 We start with a look at the ending of episode 92 and then see the Florida fans throwing chairs in. Good shit. Joey then tells us they've been banned from Disney because they don't run goofy shit. Nice.

I'm trying to catch up on ECW to the point where I can watch one episode of Nitro and one of Hardcore TV a week by the way so expect a lot of ECW all at once.

Next, Douglas with a nice promo on Tully. Dude was always a great talker. He announces Malenko and Benoit joining him as Triple Threat during this which of course is entertaining, too.

Jumping into the first match of the evening, we have Public Enemy taking on Sabu and Taz in a wild brawl for the ECW Tag belts. While the finish was stupid as fuck, the match itself was pretty good and a very nice way to start the in-ring portion of the episode. 911 got some choke slams in to please the crowd.

Before the main we saw another Raven package. I like to imagine that they broke into a school and didn't erase the chalk board message ("I hate Dreamer") and that the next school day the teacher walked in and thought, "What the fuck is this and why does it smell like cigarettes and beer?".

The main was a fun match that played out about how I expected it to. It was a fucking mess thanks to Sandman, but it was also very entertaining and a good cap overall. Post, Sandman caned Foley and tried to blind him with a cigarette before Mikey came in for the save.

A backstage segment after saw Sandman and Woman promoting the next chapter in the rivalry and then one from Cactus. Foley was such a fucking god on promos.

While neither match alone was recommendable on work rate, I still suggest watching this full episode. It's a definitive taste of what ECW was and was pure car crash entertainment for 45 minutes and I loved every fucking second.