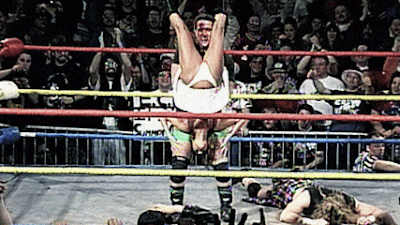 Moving along with my ECW coverage, getting much closer to my goal to watch Nitro and Hardcore TV episodes once a week moving forward, we start with Raven taking on Dreamer from episode 104. This was a definitive ECW match and a wildly entertaining, blood soaked walk and brawl. Sure, the finish was weak but it worked for the story and the entire thing was just really good television. Borderline great!

The next one was a bad match that saw Sandman win the championship by the end, with Woman serving an assist. I don't care for the feud, found the title change to be poorly handled, and honestly just don't even care for Sandman as champion in general. It is what it is. Post, Douglas put on a Monday Night Raw shirt and left as the crowd chanted Steam's one big hit. Backstage Simmons and Funk are told to ask Woman when they can get a shot at the belt.

From Hardcore TV 105, we were gifted another Raven vs Dreamer match. In this one, they literally hit each other with everything INCLUDING the kitchen sink. Raven was smacked in the balls with a plastic t-rex and then egged for fucks sake. The match wasn't as good as the above one overall, but was more historic. It's the one where Dreamer, bloodied, fights back from three finishers and takes out Raven, Richards, the damn ref, and then gives a piledriver to Beulah before joining the crowd as they chant, "EC DUB". Iconic stuff and a perfect way to close this set!