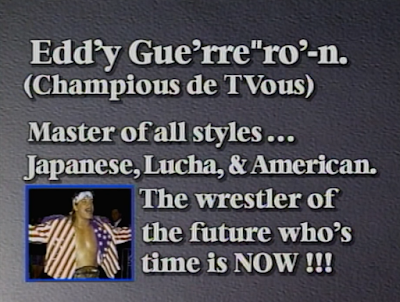 I absolutely loved this episode and it really shows how awesome ECW could be.

We start with Shane's representative basically telling us that he is leaving soon, which really does happen, because he wanted to go be a fucking dean or some shit and piss off the Kliq in WWF. The story here is if Sandman tapped out before the shit finish making it an even shittier finish.

The rest of the episode, which had about 30 minutes left, was a technical masterpiece and a truly iconic battle between Dean Malenko and Eddie Guerrero for the ECW Television Championship. During the match, it sounds as if a fan was tossed out while one of the super fans kept watching the scene was also trying to get the crowd to start watching the match again which was funny shit. Ignoring that, the athletes worked their asses off here as you'd expect given who they are/were and looked masterful as a result. The fact that ECW was willing to even run this match let alone use it in this format is awesome as even today few promotions would ever do such a thing.

We closed with a Raven music video package.