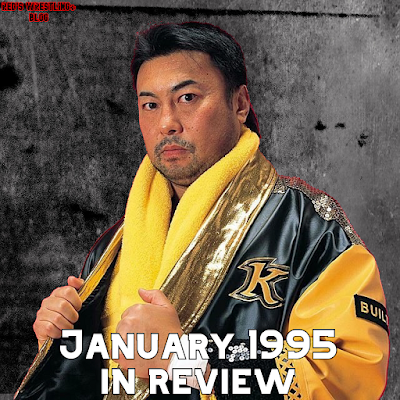 Seeing as I am working my way through Nitro and Hardcore TV episodes, I figured I'd go ahead and look at the best the rest of the world had to offer in 1995. These are the ones that caught my eye for the first month of the year. I've provided legal links to all that are available to be watched in freely.

The first match is from the legendary AJW, which I'll be watching more of soon including matches from this year, before, and after. This one was fantastic and truly showcased how athletic and innovative the roster was. This shit was years ahead of its time. Make sure to make time for it and for those keeping track it even features a set of I AM THE TABLE moments near the end of fall three.

Up next, a match from the legends themselves, Kawada and Kobashi. I had a series running here called Four Pillars, which you can still find by searching the blog, but many of the matches were removed from my playlist. I might still run through it sometime, but we'll see. At the very least I plan on watching the older content in some form either way. I was in 1992 for that, for the record. This one saw Kawada defending the Triple Crown Championship against Kenta Kobashi during his first reign and yeah, it was as awesome as you're thinking. With the classic Kaiju flick pacing and aura, these two paid tribute to those thousands that died and those still reeling from the Earthquake in Hanshin. Fantastic stuff for sure, but I can see it being polarizing. If you like this era and wanna see these titans go 60 minutes, looking near death by exhaustion after, check it out!

Third, we go to WWF for a match that was highly overrated. Bret was good here and Diesel was...Diesel, but it never really got going and was overbooked to hell. No thanks. It really defined how bad of a year this would be for WWF.

Back to All Japan for one more, we start with Taue and Kawada challenging Misawa and Kenta for gold. Four Pillars shit! Part of what makes these four so legendary is how they perfected the art of selling and the art of no selling. It equaled a laundry list of must-see matches due to the level of intensity and storytelling they added to each major encounter. This tag team match went the distance, like the AJPW match above, and was filled with high drama, awesome action, and wore you out just watching it. Awesome stuff and a very nice cap to the month of January.

My MVP for the year is Kawada, who was holding the Triple Crown at the time. AJPW and AJW were the best things going in the art this month for sure!