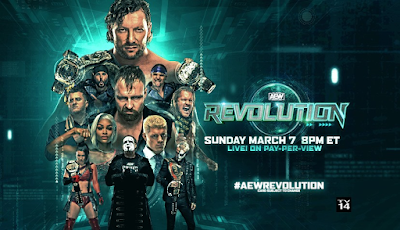 4.Face of the Revolution Ladder Match ***

These are the pulls I grabbed from this year's Revolution PPV, which happens to be the best selling non-WWE special event since the 90's!

Up first, Jericho and MJF took on The Young Bucks with the AEW Tag Team Championships on the line! Get JR some fucking water. The Inner Circle boys worked well here, firmly establishing themselves as the dicks of the match and The Bucks, who have been indecisive tweeners, worked hard as always, too. It was an 18 minute slow burn that built up nicely and the drama was quality. Fantastic stuff.

In the two spot, the gigantic clusterfuck tag team match. It's alarming how fucking huge this division is. Note I had planned on skipping this but a bud recommended it. I tend to dislike battle royales and honestly this was about as expected for the most part. Bursts of excitement when new teams would join in and then on to the next team. It was a bit sloppy at times but with the amount of folks involved that makes sense. Imagine a Royal Rumble with two dudes coming out at the same time. It can get messy. The formula for these matches is largely set either way though and it's rare that they're less than good. It's just not often they are any better, either. Unless it's from Lucha Underground, at least. The big question is generally how good the last few minutes are and the good news here is that the balls really hit the wall there. In all, I think it's recommendation levels thanks to the endstretch putting it over the edge but your mileage will vary.

Next, Shida defended against the winner of the eliminator tournament, Ryo in a great match. I felt Ryo's positioning was off a bit here and at times the match itself felt a tad off for some reason but, pasts that set of minor nitpicks, this was very enjoyable. More importantly, while the right person won, they also had Shida dig super deep and look desperate in her victory.

Nyla attacked after to...sigh...continue the angle with her and Shida. I like Nyla, but she's had her shots in the spotlight and needs to do other things. Maki, Baker, and Nyla stood tall until Thunder ran them off.

Ladder match time! The surprise was Ethan Page, which honestly I like. The dude is super talented and should be a more than serviceable addition. I do think the roster if overloaded but I'm happy All Ego is seems happy. The brass Sonic ring was interesting. It apparently weighed a fuckload. My biggest issue here is the selection of names and how I think they didn't mash them up well enough. Still, it was high octane car crash action even if it didn't hit the level I had hoped it would and a good match despite the pacing issues and general flaws. Cody was extra as fuck here. Sky winning was a nice call. Archer rocked. Everyone else did pretty dang good. I am pretty sure it's the lowest I've rated a ladder match in a long time.

Christian debuted after! While I think AEW needed a needle mover to really help them break past their plateau, I'm simply very happy for Captain Charisma. The dude is fantastic and deserves this spotlight. I hope he gets a run not too dissimilar to the one he had in TNA.

Sting's "in-ring" debut for the company followed. The package before was fantastic. Note that I have no issue with the bump Sting took. He's a big boy and knows his abilities. I think the entire thing is a fuck up on AEW's part but it's not the only one they've made nor will it be the last. I'm just happy for Sting! Cinematic in style, almost Lucha Underground-esque, and fucking amazing. Apparently Darby is the brains here and I gotta give props. Simply put, I loved this and want more. So much more of this, please.

I really hope Darby had true evidence to dispose of the allegations, by the way. It feels a lot like one of those situations where the cops investigate their own department and decide nothing wrong happened. I know AEW made some good calls during the speaking out movement but there are still a few question marks and he's the biggest.

Matches and angles not covered include the preshow match that saw the AEW debut of Maki Itoh in the United States, Miro and Kip taking out Orange and Chuck, and Page taking $ from Matt. While it all sounds decent, it wasn't enough to get me to pull the trigger. I'm trying to be more selective this year, especially as I'm watching more retro content, too. Only so many hours in a day, right? I also have a move back up to the North East at the head of April so expect a lull around that time. I have WCW Nitro reviews backlogged and scheduled if nothing else. Just a heads up.

The main event was the match that I was the most hyped for seeing as, considering the gimmick and the talent level, it had all the makings to be a five star classic. I loved seeing Bryce in the full body suite and I loved the homages here to Onita/Funk in general. I loved the drama and teases early on and how they leaned into the violence nicely as the sand dropped down. The explosions against the ropes were handled perfectly and the landmine boards weren't too shabby. I also loved the rope break explosion bit near the end. In all, to summarize, it was fucking awesome. The only thing I didn't like during the match was the interference.

And then...sparklers. What should have been a beautiful moment with Kingston and an amazing close to cap off a truly fantastic display was a dud, robbing us and the performers of the payoff that we had all waited 30 minutes for. Poor Eddie looked fucking funny selling that shit. Now, I know it was a technical glitch but still it sucked and it's okay to admit it. I like that even the most fanboy-ish of AEW diehards were admitting it. I don't like the approach after, though. Leaning into the joke might seem like a good idea but there was a better option waiting for them.

My suggestion, not that it truly matters, would have seen them run a rematch on either the next Dynamite or the one after. Doing it at the latter would have even allowed for a chance to fix things in post if need be. Do it with Kenny and X versus Mox and Eddie. Too late now but that's how I think you fix shit when you fuck up that badly.

Note that my rating for the match reflects what happened bell to bell and as a result, seeing as the kiddy firework display was after, my score wasn't lowered by it. The same is true of Onita/Funk, by the way. My disappointment happened after the match proper had completed and I felt it was worth noting that because I would have likely dropped the score down at least .5 otherwise. If I included that and the explosion had been done well it might have hit 4.50.

Anyway, Revolution was clearly a great show and deserves more praise than not. I know the thing that will forever scar this show cannot be undone, but it's tragic that it had to happen like that. AEW is still trying to grow. They've done a damn good job thus far but this could have been the next step on the ladder. Instead, it was just another move on the plateau because that's just how shit works.

If you missed it, check out anything I mentioned that sounds interesting. As always, thank you for reading.