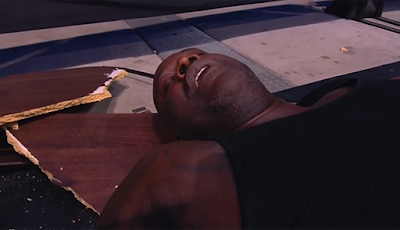 My big question heading into this was how motivated Shaq o' Mac would be, seeing as he tends to phone in basically everything. I don't blame him for the record. The dude is living and loving life and I applaud him for it. He owes no one nothing. I tend to hate celebrity crossovers for the record and can think of less than 5 I truly liked.

That said, I'd like to quickly take a side step and ask why the fuck this opened the show? The best thing I can figure is they thought casuals wouldn't watch the full show. Maybe they are right, but they dropped a lot of viewers immediately after this and I think they could have padded it out better. They also botched the build to this by...not building it.

Why even include Jade for one? I would presume to instantly give her a boost but I would bet you that she is back to Dark now for a few months with minimal to no Dynamite appearances during that span so it negates it completely. And hell, she was super fucking green here. Instead, they should have used someone else on their roster that was better and more established to get those extra eyes.

I get Cody was hurt and Shaq is Shaq but they could have done something with Red Velvet at least for a few weeks.

Anyway, the match was better than expected. Was it good? Not really, but Shaq looked like he was having fun and even took that gif worthy table bump so that worked. The chair shot spot and power bomb wasn't too shabby either. The entire thing was barely average overall really, but they were wanting to get casuals to see AEW existed and I suppose they did okay with that. It was acceptable for what it was and I really was entertained. Far better than any right it had to be. I'll give them props here for the match itself but stand by my otherwise stated issues.