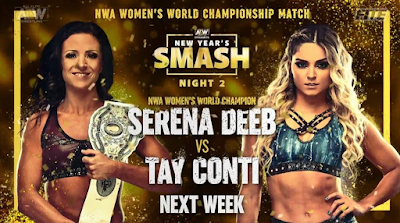 Match from AEW Dynamite: New Year's Smash Night Two:
1.NWA Women's Title: Deeb(c) vs Conti ***
Thoughts:
I had realized I had missed this one and wanted to fix that mistake before moving forward with my
AEW catch up. Since it's International Women's Day, it's extra fitting.
There's something happening with the AEW women's division and too many people are complaining to even notice. First, I love that they've been using the NWA Women's Championship essentially as a secondary goal for the ladies. Secondly, everyone has been getting better and better.
Last year, Deeb improved to a new high in my opinion and has been doing very well as champ. Tay, while still a bit green, has been looking better nearly every time she goes out, too. I'd even argue this was the best Conti has looked thus far.
In all, this was a good match. It wont be on my yearly recommendation list but I still suggest folks that are fans of the NWA to give it a look. It's a good tease for the return of the brand and also serves as a match that will be fun to reflect on later seeing as I think both will have an even better match down the road.
Thanks for reading as always and expect more to come as time allows. Some dick cut my catalytic converter off of my car the other day, a plague that is spreading across the country since the government has fucked over everyone to the point where people are desperate, so I have to take care of that before I move again at the end of the month. Wish me luck.
Red's Reviews Wrestling