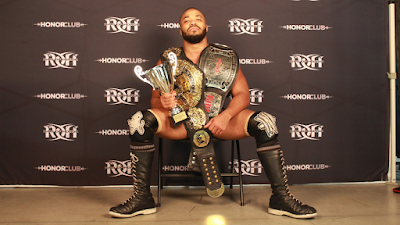 2.Shane Taylor Promotions vs The Foundation ****

I'll be watching episode 492 as well as the Championship Edition special separately. I am caught up with AEW now so lets dig into Ring of Honor next.

The first match was a lucha libre showcase with Rey Horus taking on the almighty Dragon Lee for the ROH Television Championship. I watched the lead in packages prior to this which ROH perfected last year during their return and I must say the brand seems to have more purpose and direction now than I've seen in years. I love rudo Dragon Lee by the way. Horus started the match hot and a dramatic spot heavy battle followed, with both trading big moves back and forth. It was satisfying and a beautiful display of athleticism for sure and a fantastic match. Remember, Dragon Lee is the best masked wrestler in the world that isn't named Rey Fenix and it's time we all start talking about that.

Up next, six-man action with Catch Po...I mean, The Foundation, against Shane Taylor and his boys. Not unlike the brand itself, Taylor seems motivated in his current role which is a promising sight. His promo in the setup package was high quality and I find myself also thinking his partners might have some shimmer in them seeing as I'm seeing more potential showing each time they're out. It seems ROH agrees because they were all booked strong as hell here. Note that while The Foundation looked good, of course, they were still ultimately destroyed. To put it another way, STP ran down a former World Champ, the current Tag Champs, and the current Pure Champ. The match was truly fantastic, too. Major thumbs up here and I am excited to see what's next.

Match three saw Gresham get a win back in a defense of the Pure Championship against Keys. I loved the story they sold to us beforehand, showcasing why Keys was in this position. It made the entire thing feel so much more important. I also love seeing one of Gresham's boys in action. The dude is such an underrated performer and teacher and one of the most talented technical wrestlers of all time. I wish he'd get more credit for that. Keys looked very good here and the entire thing exceeded my expectations. In all, it was a great tech battle and something I'm sure any purist would love to see.

LFI (and dipshit Flip) took on Mark, Jay, and the dudes that used to team with a pedo, PCO and Brody King. This is built off of the Rush/King title match overflow and looked promising. I admittedly wasn't sure if PCO and Brody were intended to remain a team after the Scurll stuff but I'm glad they are, at least here, and I'd like to see them continue under a new name, even. Note that Flip replaced King here. The dude is one of the top ten stupidest fuckfaces in wrestling right now and deserves to have that stated loud and clear anytime he works. Like, seriously, he's the absolute fucking worst. He's so dense he likely thinks the company was unfair toward Marty "Pedophile" Scurll. The good news is the story here was LFI fucking him over while the others just beat the shit out of him. So, that was fun. The entire thing was really just a carcrash of insanity that continued until it was declared a no-contest. While not recommendation levels in the slightest, it was still fun for what it was. I disliked King no-selling the leg work, though. At the end when it all hit the fan, The Foundation were shown backstage absolutely disgusted with the proceedings.

We close with a Foundation showcase tag. Lethal and Rhett teamed with non-member Yuta to take on Gresham, Hotsauce, and other non-member, Yehi. I am torn here a bit because I don't want the entirety of the Pure division to essentially be lumped together into one unit. At the same time, I don't hate these two dudes getting a spotlight and one of the easiest ways is to be with the group. I also really wanna see Gresham defend against a shitload of former CHIKARA dudes, by the way. This match alone has a few now that I mention it. Anyway, this was a nice cap to the set of pulls and my only "big" nitpick is that I wish it had been pure rules. The finish was a bit off, too. Past that, it was a fantastic throwaway match that highlighted how talented all six men are in the genre. Artful stuff, really and well worth watching.

Oh, and the commentary during these deserves praise by the way!

May I quickly note how well rounded this collection of matches was? I mean, I'm gonna fucking do it anyway but it felt more polite to ask first for some reason. I feel that Ring of Honor became an easy target for hate a while back but I've said many times since that the roster is so dang good that it's worth checking them out from time to time. Since their return late last year, I feel that is even more true than ever. There's a bit of everything for wrestling fans and the skill is top shelf worthy. Check out anything here that catches your eye and keep the other out for more reviews! If you have a third, maybe go watch BoJack or something.