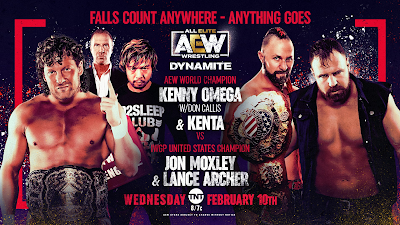 Moving along, we're almost UTD with AEW after this post. Just in time for Revolution.

Up first, Baker versus Rosa. I have to give Baker credit because she is one of the most improved workers  of the past year. This one was a good contest between the two though the finish and pacing were a tad off in my opinion. Really, it felt like a first match in a longer program where they set up bigger, better matches.

From the same gig, we have BizCliz versus Mox, Fenix, and PAC. It was a very fun crowd pleaser, popcorn style trios match. Everyone did their part nicely. Of course the Forbidden Door spot after with KENTA appearing is likely going to overshadow the match itself but it's still worth a look if you missed it.

The backstage video with KENTA and Omega was amazing by the way.

The following week, Omega and KENTA took on Archer and Mox in a falls count anywhere match. Mox even had the US strap with him finally. Good shit. I wish AEW would have dudes that have belts elsewhere wear them on TV. At least the bigger belts. Omega should have the MEGA strap every time he comes out. The fact that he doesn't makes me think we're not getting Kenny Infinity Belts after all. But yea, I love seeing KENTA on a US program where he's not being misused. I fucking love the dude. I also loved this match. It was the right amount of crazy and used the stipulation perfectly. I mean, they even included potatoes for fucks sake. It was car crash television and fantastic at that!

Moving along, The Bucks defended their belts against Proud & Powerful. I might get some shit on this one but while I found it to be a fairly good match I also found it to be underwhelming considering my expectations. The flow was a bit off for me and the finish was super weak. While the action itself was solid throughout it just never really hit that next level for me and simply felt like a good but forgettable tag match.

Archer and Fenix added to their highlight reel in the next pull. I love seeing Fenix get good looks and a nice push and it seems he's at least getting to show off in main events this year so that's great. I'm surprised Archer is being booked this strong but it's not a terrible move. There was a Eddie/Mox spotlight here too which played well. This was another fun, very good, popcorn multiman.

After, The Good Brothers beat down Mox and Omega came out to reveal the Exploding Barbed Wire Death Match!

We close the set with Fenix taking on Archer. I mentioned above, but it seems like both of these dudes are getting a little elevated right now which is cool. AEW does moderately well at trying to push up everyone at the same time and seems to be doing well with these two. David vs Goliath matches can always be entertaining too so this had a lot of potential and it delivered nicely. Fenix was his masterful highflyer self and Archer stepped up big, combining for a great match. Thumbs up for sure and a nice way to cap this.

I'll be posting my review of Fall Brawl 1995 as well as a roundup of matches from the women's eliminator tournament etc ahead of Sunday's show next. Thanks for reading as always.