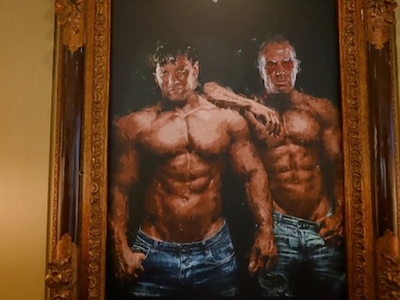 I am catching up on 2021 content now, and wanted to start here so I am ready for Revolution. Note that I have a "last call" roundup of 2020 stuff that I will be putting out soon, too. Also, the Women's Eliminator Tournament AEW roundup should be up, obviously, this week.

Up first, Kenny defended the AEW World Championship against Fenix in a match that was a perfect start to my 2021 wrestling watch. Literally the only weak part of this was JR. Otherwise, this was fucking fantastic. The drama, the athleticism, the action. I loved the hell out of this match! After, The Good Brothers came out to aid Omega and stop a Mox attack. Major props were they're deserved for this match and everything that followed! Too Sweet!

In the next pull, Darby defended the AEW TNT Championship against Brian Cage. It was a David vs Goliath style match with two problematic dudes and it way overdelivered. The table spot early on was sincerely one of the best table spots I've ever seen and I think it's a rare time that Excalibur actually undersold something. Overall, this was fantastic stuff and one of the better big/small matches of late.

Speaking over overdelivering, Jungle Boy and Dax put in for a very fun match. The extra stip with the seconds was overdone and unneeded but the work itself was great stuff. Jungle could easily be a big star for AEW sooner than later and Dax is just so damn good. I'd be okay with more singles matches from the FTR guys. It'd be like Malenko stuff.

Last from January, The IMPACT Tag Champs, The Good Brothers, and the AEW Tag Champs, The Young Bucks, took on the Beaver Boys and Super Smash Bros section of the Dark Order. Pure fun. The BizCliz reunion was a nice sight, Silver was the Meat Man, and we even got a Speedball shout out (whom I expect to be there this weekend). After, Fenix and Mox cleared house. A thumbs up for the atomico and a worthy end cap for this set!

February should be up soon as well as a roundup of matches from the eliminator tournament.