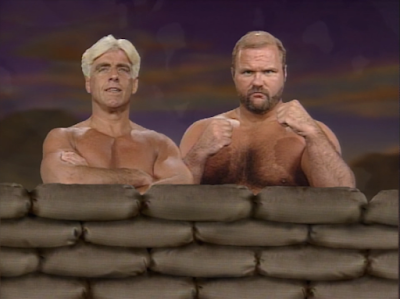 6.WarGames: Hulkamaniacs vs Dungeon of Doom *1/4

The kids wanted to watch the full event instead of just it in parts. I have a feeling I'm going to regret this because I know this show is infamous for being a chore but maybe it'll be a fun train wreck. I am also posting 2 days earlier than intended just because I wanted to.

The first match was actually great, even with a the amount of cliches and rest holds. The finish was also not that well done. That said, Badd and Brian worked hard and more than made this worth watching in 2021.

Even though I am watching Nitro and the PPV's, I'd note that this is still early on in that run and as a result they are mentioning stories that are rolling over from before their Monday debut as well as the other ongoing shows.

Up next, Pittman came down from the sky to choke out Cobra and eventually put him down in a strange trash squash. At least it was super fast.

The Mr. Wonderful package made me feel as if I had taken some acid. It was a disaster.

A Flair promo with Gene followed building up the semi. Good stuff.

The TV Championship match was about as good as expected. Poor Renegade. This is also way before DDP was truly a great worker but at least seeing him win gold was fun. Below average at best match, though.

The Tag Championships also traded hands but that match wasn't too much better. It was okay at times but largely felt like they were padding out the runtime and the finish was fucked. The good news? Like the last match, the swap was a good call.

The semi helped get things back on track, with Flair and Arn putting in for an highly enjoyable contest. While we did get a shit finish, it wasn't done too terribly and everything before it was high quality. Arn winning was a very nice surprise and the story work and psychology on display made this well worth seeing even by today's standards.

The rest of the show was laughable more often than not.

We saw a clip of The Giant running over Hogan's motorcycle. We saw a cringeworthy set of build up packages. Then we got to the main event which was arguably the worst WarGames match of all time. It was a fucking mess. The heel side was a terrible combination and the layout was completely mishandled. Even the payoff of it all was pretty bad until The Giant came out.

The Giant's part that led to the fade to black on the event was handled well.

Fall Brawl itself was truly an experience but far from one I'd recommend to someone else. The opener and semi are worth seeing but basically everything else here was skippable at best or dumpster fire at worst. If you decide to dive into old WCW like I am doing, make sure to just be selective with this one and maybe stick to highlights for the rest.