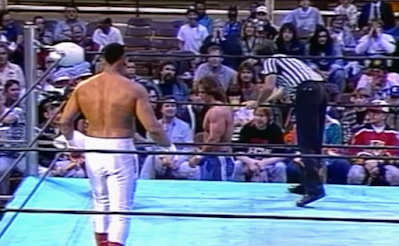 2.ECW World Title: Douglas(c) vs Simmons *1/4
Thoughts:
Public Enemy kicked this one off with a cringeworthy package and then Joey tells us about the card for the episode. We move ahead to a clip from last week that saw Bad Breed break up and Ian attacking his brother after.
The first match of the night was Benoit versus 2 Cold Scorpio. It was as good as I had hoped for a throwaway. These two have been just as good as I remembered during this watch through of old ECW. Hopefully there's a rematch soon in these episodes!
They taped out of what I swear is a rodeo or some shit by the way.
Next, Joey announces Tully has left ECW and then Paul cuts a promo building Sabu and Taz vs Public Enemy. It was honestly really well done for what it was but the amount of chest hair on display should not be understated.
An Extreme Encyclopedia package promotes Cactus Jack versus Sandman for the next episode. Wow worthy stuff right there for sure.
Raven gets a spotlight next that will surely give you a fucking headache and then a promo from him on the swings. It sounded like shit I wrote back in high school.
The main event saw Shane Douglas against Ron Simmons. Ron magically was fine and no longer injured...until he wasn't. After a few shots, the match ended in no contest due with the ref claiming Ron could no longer compete. It was honestly a mess and it's good that they ran this in Florida and not Philly. Post, Douglas issued and open challenge that was answered by....Tully. Benoit and Malenko cleared house with the episode ending with Tully being put in a figure four by Shane.
The episode was a bit mixed, with a nice opener and some decent stuff after but the finish was messy. At least it ended on a high note and overall it was pretty entertaining throughout. If you're interested in watching some classic ECW matches, the opener is the only recommended thing here. If you wanna watch Hardcore TV episodes, this was one of the best I've seen thus far.
Overall Rating: 60/100%
Red's Reviews Throwback Reviews Wrestling