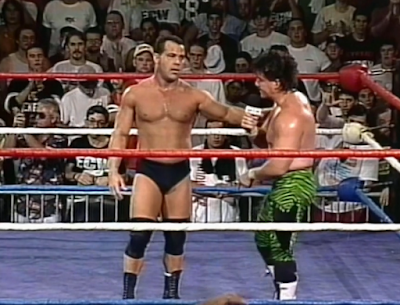 ECW Hardcore TV can be an amazing thing at times and I'm really enjoying this journey, most of the time. This one was one of the best.

We start with clips of the Eddie/Dean feud, which I've stated before has been but it's been an amazing thing to witness. So, it's a bit bittersweet that this episode sees another match between the two but also their final one in ECW, a place where they were allowed to truly go balls to the wall.

Lets just dig in and stop whining, though.

We start with Joey Styles and 2 Cold Scorpio. This was recorded a day after 2 Cold won the Television Championship from Eddie, for the record. It was basically just Scorpio being cocky as the new champ. It was fine for what it was. Joey then told the crowd that, thanks to a partnership between New Japan and WCW, Dean and Eddie would be moving their talents to TNT. The reaction was as expected and I sadly agree, as much as I enjoy watching WCW Nitro.

Our only match of the night saw their farewell match, with a best two out of three falls format. The respect shown to these two men from the crowd said it all and they, and all of those watching on TV then and now, were rewarded once more with another must-see encounter between the two in the middle of an ECW ring. ECW had a lot of flaws that all deserve a spotlight, but they also were masters of letting dudes just do what they did and sink or swim on those abilities. Eddie was always a star and ECW helped showcase that, getting him ready to steal our hearts for years after. Dean remains one of the best technical wrestlers of all time and sadly a dude that I think is far too often left out of GOAT technician conversations. This match was pure entertainment top to bottom and something I truly enjoyed. Their footwork and execution were so superb that I was left questioning if something I saw was a slight fuck up or intentional, which is a true sign of how damn good they were.

After, they both said farewell.

If you've never seen their epic rivalry in ECW before, make time to fix that mistake right now. Work through it and finish with this episode, which happens to be one of the best episodes of wrestling ever.

We miss you Eddie. RIP.