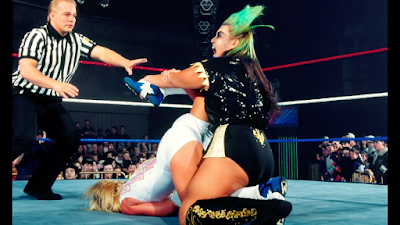 So, as the kids and I work our way through WCW Nitro, I knew I was nearing the debut of Blayze so I wanted to give them a look at her in advance to make it more understandable when she appears as Madusa. I also wanted them to see Diesel as WWF Champion so when he comes in it makes sense, too. I'll show them Razor soon.

I watched the first match of this post-Mania edition because I thought my son would get a kick out of Bob, the race car driver. He enjoyed him but was rooting for Hakushi instead. This also worked so they could see Waltman, though I doubt he left a big enough impression for them to really remember him. The match itself was a below average slog and not worth further words.

The Diesel promo with VKM was okay for what it was. Nothing more nor less. Just him offering another shot to HBK and questioning Sid.

Luckily, the big match of the episode that I was wanting them to see was worth seeing, seeing as the rest was skippable otherwise. Bull and Blayze worked a mile a minute and put in for a very good championship match and it was well received by all.

I'll be watching select other WWF stuff from the year but for now at least the championship match brought the goods.