The Forbidden Door is #ALLELITE 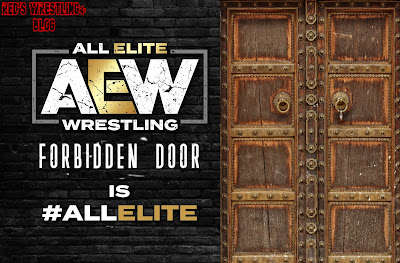 Ladies, gentlemen, and non-binaries, the forbidden door has been unlocked and is slowly being opened. Things we once thought impossible and/or unlikely are shifting. I have no idea how long things will continue to grow but I do know that we should enjoy it as long as we can before politics eventually fuck it all up. Lets break this down, though.

For AEW, this is a big buzz moment that the company is hoping to use to push their ratings forward. They are also trying to set a precedent that they are truly wanting to work with everyone and, so far, they've basically proven that is their goal instead of just cheap talk. Thanks to Moxley, this has happened seeing as NJPW wanted to get the KENTA match done and, with COVID, this is the easiest way. With recent trademarks, I am expecting a super show sometime this year. With their third hour of television on the horizon it should open up more time for such angles, too. Now, the big question is if we can get DLC packs with these extra dudes for the upcoming game!

I'd argue no one is more excited right now than IMPACT. They have been worth seeing for a while now but still have the TNA stink on them forever keeping them down. Partnering with the hottest newcomers in the game is big. Making amends and partnering with NJPW is big. You've got to know that they gain the most and also are just excited to be included.

NJPW wants Mox and KENTA to happen as soon as possible. AEW had exclusive rights to what he could do stateside. NJPW wants the Good Brothers. They also want to expand into the United States, which stalled under COVID. Now, they get all of that. The announcement of older content on ROKU, talks with Pluto, and a possible return to AXS is nice, too. My question is what NJPW wants in return. With ROH, they were booked as superior in a way that undermined their partner. Will AEW manage to get something different long term or is that were cracks start to form down the line? With IMPACT, I think we'll get that kind of 80/20 deal.

Other feds tied into this include NWA, AAA, ROH, DDT, and CMLL.

For NWA, I don't see much changing from what we have right now. The NWA Women's Championship will likely continue to appear in spot matches for AEW. I hope when Powerrr returns in a couple of months that we get something similar to the now dead Scurll/Aldis angle. Perhaps Cody/Aldis again? We'll see. Largely, I don't expect much of a change for them from the AEW/NJPW/IMPACT relationship, though.

AAA has been working with a lot of folks including IMPACT, MLW, and AEW. I actually see them working far closer with MLW going forward instead of the other two due to Konnan as well as general politics, but I don't see a major change here, either. Kenny is Mega Champ and will continue to be as long as AAA sees it as beneficial. They have a loose relationship and that's where it stays. For IMPACT, they just brought in Taurus so yea, don't expect things to be that much different. And they also have a connection to ROH thanks to Rush and family.

ROH is the most interesting in my opinion. With the Scurll situation, a deal between ROH and AEW is no longer a certainty but I still see something happening there. It's pure speculation, but I'd be surprised not to see ROH involved in a super show event this year. Perhaps All In can come back? Their relationship with NJPW is the bigger question mark. After their New York event where the perception was that ROH shit the bed with their half of the event, fair or unfair, many were left wondering if NJPW would even continue working with their long-time allies. I say yes to a lesser degree, which would honestly be best for Ring of Honor, but we'll see.

DDT will sadly not be expanding much either. They have a friendliness with AEW, thanks to Kenny, and you can see it with Omega appearing in DDT as well as the upcoming tournament that showcases several TJP workers. But I sadly don't think we'll be seeing Endo or Takeshita on Dynamite any time soon.

CMLL is also in an interesting position. Is the NJPW/ROH/CMLL deal still possible? I'd say if this one falls apart it is because of CMLL and no one else. If they can get over themselves the deal remains. As it stands that deal means yearly Fantastica Mania events, NJPW sending some young lions to train in CMLL, and some lucha names in ROH and NJPW for select events. Again, if CMLL can remain calm about the forbidden door moves, things will likely stay this way. I don't see any expansion past that norm, though.

So, we have AEW/NJPW/IMPACT. We have AEW/NWA. We also have, maybe, NJPW/ROH/CMLL(/RevPro) still. We also have some form of relationship with AEW and DDT. With AAA, they are loosely working with a lot of people. What will break it all up and how long does it last?

So, by the end of the year I see basically everyone that isn't WWE (and PROGRESS etc) working together in some form of conspiracy theory level yarn map. I expect a super show and several crossovers and general cameos on tv, too. Also, we better fucking get Bullet Club vs The World in a Blood & Guts match! It's going to be an awesome year for fans so, again, enjoy it while it lasts. What are your predictions?

Drop a comment here or on the social media posts I make sharing this and let me know!