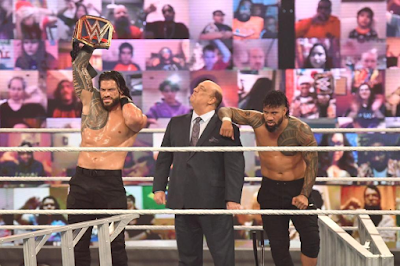 We start with a six-man from SmackDown celebrating Pat Patterson. I'd add that we should always give some level of trust and respect to those alleging to be victims and that Patterson has such allegations. I also know people in the game whom have spoken of some shady behavior involving him, too. Sadly, many refuse to even consider such things to be possible because they speculate that such claims come from a place of homophobia and/or are focused too much on nostalgic loyalty. The match itself was pretty fun stuff. They played it as an entertaining exhibition and let loose. It was very good and nice entertainment levels start to finish. Post-match was fun, too.

Next, the two WarGames matches starting with the women's match.

Raquel is still green but is getting better and I found her repeatedly booting Io from getting in a bit funny. It felt like something from a Dead or Alive DG show. Her moments with Rhea were fun, too. I was having a good time with this but have to admit that Io jumping off the top inside of a trash can really put this over for me. Add in the double stomp trash can spot, the eclipse with the chairs, and a few others and you have a pretty entertaining match. My biggest complaint was the ladder dive with Shotzi and Candice. It was poorly done and completely shit. Things remained a tad sloppy after too down the end stretch and I also found Gonzalez getting the victory to be a bad call. Still, well worth seeing despite the complaints. Borderline great.

The other WG match was fantastic. The damn Bitter End on the chair was sick in particular. Kyle's feud with Dunne has been fun and was a major highlight here. Kyle has also notably been a major player in 2020 and stood out in many encounters which was nice. McAfee, to his credit, was honestly not bad, either.  Too bad he was fired on Christmas day. But damn, I love this match gimmick! Check this one out for sure if you skipped it.

Fast forward to an episode of NXT a bit later, we have Kyle and Pete in a #1 contender contest. It worked nicely as a follow up and was simply a very good technical showcase for both men.

Next up, Drew and AJ. They played this a bit David vs Goliath style with Styles being used as an action figure taking loads of big spots. Miz's cash in late in the match was interesting in that it made it clear they had no idea what the end game was a few months ago with the MITB match. Miz is pure dork. The cheesy chair breaking spot was fun for what it was and my kids loved it, so there's that. It was a circus act but a pretty good one for what it was.

Roman, one of the best workers of 2020 from a story appreciation aspect, defended against the always underused Kevin Owens to bookend the end of the set starting with the TLC match.

Their TLC match was fantastic and my favorite thing on the set. Major spots, tons of drama, and even the interference didn't offend. I honestly loved this. Note that they really should remove pencils from the commentary booth if they're going to bump it. Pure fighting spirit!

I mixed in the Firefly Inferno match because of the response I remember it getting. From a technical stance this was average as fuck and my rating reflects that. That said, I appreciate what they were going for, found it ok for what it was, and the dramatic moment at the end was kind of cool I guess.

The last match of the set saw KO get one more shot against Reigns on Raw in a cage match. It was televised so there are the normal commercial break hiccups disrupting the flow a tad and the finish was cheap, but damn it was great, too. Kevin Owens has been one of my favorite workers for years and I love when he is motivated. These two matches he was truly motivated. Roman is killing it as a heel, too. Watch both of these matches!

Thanks for reading as always.