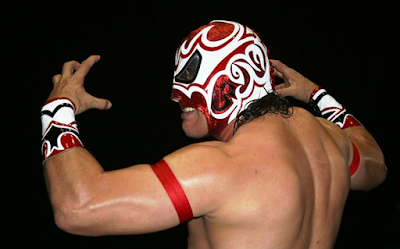 Time for some insane lucha libre action! While this stuff can come off as reckless and dangerous at times, there is also a level of passion and dedication that you get from some promotions and select gems that cannot be found basically anywhere else in the world. What happens in Mexico tends to be constantly underrated and far too often looked over by fans and I hope that the features I've done here in the blog since I launched it have helped fix that at least in some minor way.

Up first, Wotan and Super Dragons took on Fishman Jr and Antheus in LLPM. Any Kylo fans? Wotan had his Kylo mask on. Also, Mexico clearly is a lot like the southern United States in that they just don't give a fuck about trying to be safe during a pandemic. This started off weak, with rough around the edges groundwork. Fishman yanked off SD's mask at one point and basically gave us the ending of an apuesta so if you think you know who it is you can confirm here, by the way. Fishman was then thrown at a kid in return. Once it all broke down into a chaotic brawl it was...still not really good, sadly. I like bloody brawls as much as the next turd but yea, this was just barely even okay for me and never really much more than that. At most it made for a gif or two for fans seeking such things.

Next, IWRG championship content. Big Ovett, a regular to this fed that has thrown all caution to the wind and said they just don't care, just died from COVID. Just a bit of info. RIP. Puma and Baby played this pretty even, building up things nicely as they went along and laid it our rather smoothly. It was borderline great stuff for sure. Note that the link above shows part of the match. To see the full thing requires being a member to +Lucha.

Heading over to CMLL, we have Euforia and Stuka Jr one on one with typical 2/3 falls CMLL lucha rules. I haven't watched a lot of CMLL content from 2020 because, frankly, there hasn't been a lot I found worth watching. While I love a lot of the roster, the company is such a cluster fuck that it's hard to give a damn most of the time. The talent is in the same boat and rarely tries to get out of autopilot, too. When Rush and Dragon Lee left, you can tell the situation got worse. Luckily, there are still some gems like this one. Despite having no reason to be this damn good, this was indeed fantastic. I mean, it could main event a big CMLL show and I'd have not complained a bit. Stuka and Euforia stepped up big and I suggest checking this one out if you missed it.

Next, we move north a bit to Texas to close this one. When I spoke to the owner last, he said certain protocols were being followed for these shows. Oh well. Laredo Kid and Arez had a fun exhibition here, with a great balls to the wall sprint. If you love spotfests, this is for you.

The next roundup should be up soon. Thanks as always for reading.