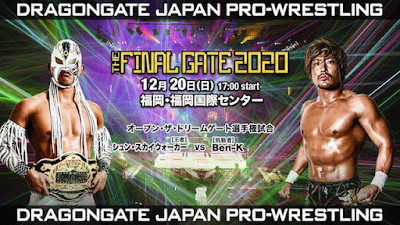 DG ended the year with one of their most talked about shows in a long time. I sincerely can't remember seeing that many people talking about the product before and after a show for years so I was excited to see this. I was also excited for the roster and hope that they earned a few more eyes with this.

The first pull saw a cluster four team, 12-man match. No company does multiman clusters as good as DG. The roster is simply bred for this shit. I call matches like these Sampler Matches. If I was going to make a sampler DVD of 2020 content from the company, this would likely have been included. Not only is it a great contest with the right amount of action and comedy but it worked well as a taste of what the product is right now.

Next up, Okuda put the Brave Gate strap on the line against Kagetora. Okuda remains a bright, burning star on the horizon. Kagetora was an interesting choice of an opponent and had some issues, but is still a reliable enough dude. In all, this was pretty good stuff and the champ came out looking good so there's that if nothing else. Consider it a nice little throwaway.

Moving along, R.E.D. and Team Toryumon went to war in a Losing Unit Disbands matchup. No disqualifications and elimination rules in place. This had all the makings for an epic MOTYC level encounter and they delivered in epic fashion. It just felt important and they used their time wisely, speeding  along with drama and excitement growing more and more as it progressed. We even got to see Dragon Kid maskless as he and SB KENTo worked a dramatic endstretch. The latter clearly has rocket boots right now, by the way. This is my match of the night easily and one hell of a showcase. Watch it ASAP!

The show ended with Skywalker and Ben-K. Sadly, I think this one ended up hurting the brand due to the ending which is sad because of how well the roster had done here. There is no defense for shit like this and we've seen it far too often in wrestling. Lately, even. The match itself up to that point felt a bit off, by the way. While still pretty good overall, the last minute ruined it all for me. I don't blame Shun because he was in the moment. I do blame Yagi, though. It was clear that he was knocked out. After the first moonsault, it was even more obvious. Instead, we got one of the worst things I've ever seen in a ring. You know, I actually do blame Shun a bit because he should have known better than to go for that second moonsault after the pin fall fuckery. Now, while I don't give a fuck about companies themselves anymore, caring solely about talent themselves, I know many love their tribes. I will say that this doesn't reflect DG as a whole. I've been watching this company for over a decade and this was just a giant fuck up. Don't let this be the reason you choose not to support this crew. I cannot in good faith recommend watching this specific match but the rest of these matches were enjoyable.

2021 should be an amazing year for these guys. Keep an eye out!