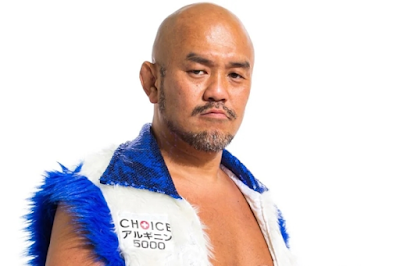 Matches:
Night One 11/22
1. Brookes vs HARASHIMA ***1/2
2. Takeshita vs Daisuke ***3/4
3. Higuchi vs Ueno ***1/2
4. Akiyama vs Endo ***3/4
Night Two 11/28
5. Higuchi vs Endo ***1/2
Night Five 12/12
6. HARASHIMA vs Takeshita ****
Finals, Night Six 12/27
7. Finals: Akiyama vs Takeshita ****
Thoughts:
This sampler from the 2020 D-Ou was just as fun as expected. DDT is thought of solely as a comedy company by many in the same way that folks think of CZW as only hardcore and death content, but in both cases they are way off base. The roster that calls DDT home are some of the most well rounded workers in the game and are capable of super high quality matches just as much as they are insane gimmick bouts. I'd argue they work harder than most as a result.
Note for those that follow the news, but if you saw what was happening in Texas this week...yea, I was in that. Spent most of the week without power. That's why things went a bit inactive here and on WN!W again for those that might have been curious.
Due to the hectic nature of the week I'll also keep this review roundup nice and short. Everything you see above was worth watching. Every worker involved in the matches deserves credit for their part and worked hard to make for memorable matches. Jun Akiyama in particular should be mentioned not only as the victor but also for keeping up nicely with talent that are far younger than himself. His matches in DDT have been enjoyable and he's shown that he can still go when the occasion calls for it. It feels almost like he's elevating dudes a bit, too. Takeshita deserves major props too for once again being awesome every damn time he works a match.
Again, a big thumbs up to the roster in general, though!
If you missed these and have some form of interest in the promotion or just a habit of seeking out good content, look no futher.
Up next in my game of catch up includes a puroresu roundup, episodes of We are STARDOM!, a look at select matches from Final Gate, a review of the Brody Tribute episode of AEW Dynamite, a write up on ChocoProLIVE!!, and more
Thanks for reading!
Red's Reviews Wrestling