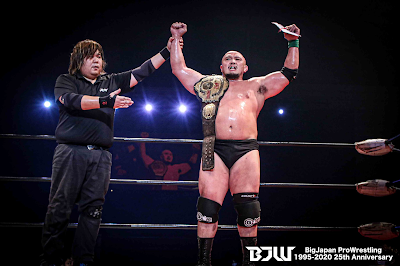 Time for some Big Japan? Yup! I'm fucking tired as hell, but fueled by coffee, Dobbs getting his show canceled, and Dogecoin rising the fuck up!

The first match saw the Crazy Lovers take on DDT's Shunma and Yuki Ishikawa and it was pretty damn fun. I'd love to see Takeda and Shunma one on one. The second match from the show had a finish that sucked and there were a few spots I didn't love but it was still fantastic shit. The avalanche tombstone into the glass in particular was amazing.

From the All Best Main Event show, we started with a great tag match that showcased both teams very nicely. I really hope we can get more of T-Hawk and El Lindaman in AEW sooner than later. The Astronauts are a team to watch in 2021. The main from the show was fantastic stuff. As simple as they are, Okabayashi matches tend to rock and Seki truly is awesome here as usual, too. If you love meat tower clashes, this is for you.

The last pull saw Ishikawa and Kodaka in a scaffold match. They used the stipulation pretty well and had some pretty awesome spots mixed in. Isami Kodaka remains one of the best names in the death genre and proved so once again with this one.

These lads brought it in these five. If you missed 'em, make some time!