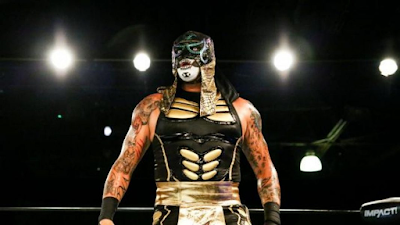 Matches:
1.Bunkhouse: Natural Nightmares vs Butcher & Blade (11/10) ***1/2
2.Penta el Zero Miedo vs Rey Fenix (11/10) ***3/4
3.The Young Bucks vs Top Flight (11/18) ***1/2
4.NWA Women's Title: Deeb(c) vs Thunder Rosa (11/18) ***1/4
5.Page vs Silver (11/19) ***1/2
Thoughts:
I enjoyed Full Gear a lot, considering it one of the better ppv events I have seen in a while. Now, lets take a look at pulls from the rest of the month.
The first pull was the bunkhouse match I saw promoted on the before mentioned special. While a bit rough around the edges, it was still a wildly entertaining brawl and a very fun spectacle. Who doesn't love a spectacle?
Up next, the Lucha Bros went one on one once again. I've said it before, but I love brother versus brother matches and these two reinforce that position each time they're booked into such a situation. The pacing seemed a tad off early, but the big spots and drama down the stretch made up for it. I'll admit that I love Eddie but I did think the commentary work during this between him and Tony was far overdone so if you missed it consider watching on mute with tunes playing. In all, great stuff either way and PAC returning post was a fun cherry.
The Young Bucks and Top Flight was pretty good stuff. Lots of creativity on display for sure and it felt like a true proving ground style affair, with TF coming off looking more than worthy of being signed. I see great things in their future!
Speaking of contracts, I watched the contract signing between Kenny and Mox.
I watched the NWA Women's Championship match digitally with a bud of mine. I had decent expectations considering how Deeb has been working and especially since it was a follow up to that fun one that I just watched on Shockwave. While arguably a touch below that one, this was still good stuff. I didn't love the interference but loved that it didn't cause a shit finish. I felt it ended a bit abrupt, too. Outside of that, it was a nice title match. I appreciated the technical work, thought the spear and a select few other spots were very well done, and really just say consider checking it out and enjoy. The brawl in post was fun.
We close this set with Silver and Page in a very good match. Silver looks to be grooving nicely into a Malenko style role of sorts in AEW. It felt like largely a throwaway but Evil Uno suggesting to Adam that he join the Dark Order after threw that thought in the trash instantly.
AEW had a solid November it seems. The December roundup will hopefully be up ASAP as I near completion of 2020 content and the next roundup in general features Dragon Gate!
Be safe, be well, thanks for reading.
Red's Reviews Wrestling