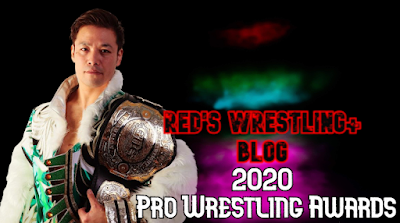 It's that time once again! Using a system I have in combination with my MOTYC tracker, which can be found HERE, I have finally determined my picks for the 2020 RW+B Wrestling Awards!

1. MATCH OF THE YEAR: Go Shiozaki vs Takashi Sugiura

Not only was this match a five star classic, but it was just what I needed after the disaster that was 2020. The brutality and drama on display and the general beauty of this match was made it an easy pick for this award!

Runner Up: WALTER vs Ilja

While Go didn't score enough points to technically win this award outright, there was no doubt in my mind who had earned this one. Every title match was noteworthy and he had one of the best championship reigns of all time along the way. Go was the best wrestler of 2020 plain and simple!

Mayu was once again awe inspiring, showing up time and time again as a true workhorse for STARDOM. Two major matches against Iroha alongside a nice title run and a handful of other memorable contests earned her the title of best woman in 2020.

4. TAG TEAM OF THE YEAR: The Young Bucks

While Omega and Page was an epic union attached to a simple yet magical story, Matt and Nick were the top team of 2020 due to how damn hard they worked all year. I have no doubt that they could repeat again this year simply because that's just how damn good they are!

5. FACTION OF THE YEAR: The ELITE

Kenny Omega, Adam Page, Cody Rhodes, and The Young Bucks! These men killed it time and time again, match after match, and dominated the world in this category. BTE and AEW were their universe and everyone else was just along for the ride.

Moxley helped AEW during the pandemic by being a noteworthy champ that more than held up his end of the deal. He worked his ass off, had several enjoyable matches and angles, and cut multiple killer promos. Add in the fact that he was the catalyst for opening the forbidden door recently, as teased all of 2020, and he added an extra cherry that wasn't even needed seeing as he had already sealed this up easily.

Mexico wasn't as hot as usual last year, but Laredo still found a way to stand out! He went international a bit, carried gold for AAA, and ended the year with a killer Mega Championship battle with Kenny Omega. I sincerely hope he gets more looks in 2021 because the dude is long overdue for a huge push.

Kenny is a dude that I consider to be the best active wrestler in the world. Last year, he largely was a tag team worker alongside Page which was an awesome ride. By the end of 2020, he had went back to being The Cleaner, was working AAA and IMPACT, won the AEW Heavyweight Championship, and looked to be on the brink of returning to his throne as the true king of the game. If I counted tag match appearances fully in my calculations of Wrestler of the Year, he'd have won easily. Just saying.

Go Shiozaki fucking killed it with one of the best title runs of all time, as mentioned above. Simply put, he killed it and earned this one, too.

5. EUROPEAN WRESTLER OF THE YEAR: WALTER

The Euro field was admittedly a bit weak this year, but WALTER stood out. While NXT UK is for sure a largely soulless take on stuff like PROGRESS, the talent is still there and you can still get some gems. WALTER and Ilja was a 5 star war in a vacuum and that earned WALTER this spot. Hopefully he continues to dominate in 2021.

I loved We are STARDOM!! but AEW Dynamite had to win this. The show was entertaining each week and even at its worst was still better than almost anything else in the game. The stories are typically well done, the issues are largely minor, and the surprises are always fun. Dynamite is a game changer and I always find my self enjoying the modern day Nitro.

7. COMMENTATOR OF THE YEAR: Excalibur

Excalibur is a scholar on the business, oozes charisma, and brings his brand of excitement to the AEW booth in a way the helps make every match seem better as a result. He even makes up for JR's flaws. Excalibur was an easy pick for this spot for sure and I don't see that changing unless Mauro comes back soon.

This award goes to a wrestler that did the most for their home base. While Moxley is an easy #2 for this, and as good as the NOAH crew is, I don't see last year being anywhere near as noteworthy for the company as it was without Go as GHC Heavyweight Champion.

The sheer emotion on display alongside the quality of in-ring content made this not only the winner of this award, but also one of the best things I've ever seen in all of my years watching wrestling. It was tragic yet beautiful and amazing from start to finish.

Eddie has been able to kill it on the microphone for years but never has he seemed to be this damn motivated. He was a huge standout for NWA, making every moment he had a segment feel special. After jumping to AEW, he's been even better. No one talks as good as Kingston. Full stop.