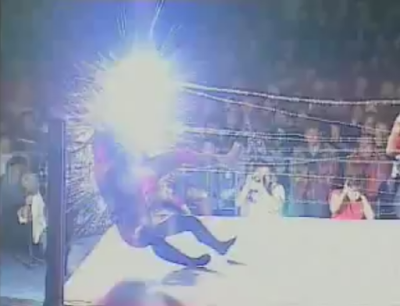 5.No Ropes Exploding Barbed Wire Double Hell Exploding Ring Death Match: Pogo, Funk vs Hayabusa, Tanaka ****1/2
Thoughts:
In light of AEW's big match next week with Omega and Moxley, I wanted to showcase a bunch of matches that I've either never seen before or, in most cases, haven't seen in years.
Lets dig in!
Up first, a masterpiece of destruction! Of course, it featured Funk and Onita though so it only makes sense that it'd be such a thing. The funny thing is how fucking well this holds up, too. It's been years since I've seen this epic encounter but it was even more beautiful than my memory suggested, with each blow and every drop of blood adding another brick on the wall of this movie-like battle of hardcore giants! The post-match is what took this from being fantastic to one of the best things ever to happen in a wrestling ring, of course. I'll refrain from spoiling anything but strongly encourage you checking this out if you've missed it.
Second, a ring set up in the middle of a pool and six dudes trying to murder each other. What's not to love? I mean, at times it felt like we were seconds from this turning into a snuff film for fucks sake and if that doesn't at least peak your interest I have to ask if you're on the right site right now. I recommend this fantastic one for fans of gory slasher flicks.
Up next, the infamous finals of the 95 KOTDM! While I could have done without the interference shit, admittedly the big bang wasn't done super well, and the finish was fucked, this was still pretty damn fun. I remember seeing it back in highschool and being mesmerized and while it doesn't hold up nearly as well as I thought it would, it was still good fun. Foley and Funk are gods of the genre and always deserve a click even if the match underperformed.
Toyoda's retirement match was a blast (no I will not apologize), with her and Kudo fucking killing it. Not only was this superior to the epic Onita/Funk war, it also had just as much passion and an even better in-ring work rate. I have no idea how I had never seen this before but it officially is on my very short list of matches that have earned five stars from me. Top to bottom, it was a work of art and I will be likely rewatching it once a year moving forward! FUCKING WATCH THIS!!!
We close with a Hayabusa match which just....feels right. If you loved the pool match, you'll love this one, too! Sadistic as it was beautiful, these four sold the violence and drama to perfection as they brutalized each other start to finish. Fighting spirit defined and one of the best death matches I've ever had the privilege of seeing!
So, AEW reviving this is pretty awesome in my opinion. Sure, it's insanely over the top but so is wrestling itself! They'll be the second US promotion to air one, with WSX being the first. In less than one week, one of the best hardcore dudes in the game against the best wrestler in the modern era in one of the most unique death style match gimmicks? And you just know it's going to be one hell of a spectacle and honestly everyone that isn't a Cornette kiss ass should be excited about this!
Red's Reviews Throwback Reviews Wrestling