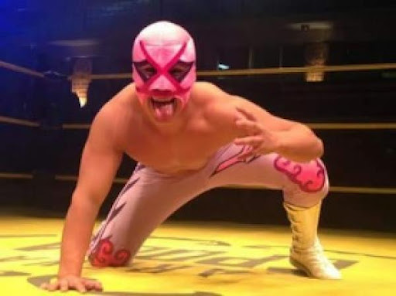 Matches:
1. Los Golpeadors vs. Demonio Infernal, Fresero Jr. (11/01) ***3/4
2. Ricky Marvin vs Epydemius (11/10) ***1/2
3. Los Golpeadors vs Puma King, Ciclon Ramirez Jr (11/14) ***
4. AULL Lightweight Title: Freelance(c) vs Impulso (11/21) ***1/2
5. AULL Welterweight Title: Centella Oriental(c) vs Villano III Jr (11/29) ****
Thoughts:
A roundup of AEW content was supposed to be #21, but I am holding off so that I can watch one of the matches from the list with a bud of mine. He's having some personal issues so that post is on the back burner.
Up first, Dragon Bane and Hijo de Canis Lupus in action from the recent Castillo del Terror gig. One of the most reckless looking events I've seen during the pandemic for sure. Fucking weak ass shit for sure. Moving past that bullshit, this was what I hoped it'd be when I added it to the list; a viscous brawl full of sick spots and a nice amount of color basically right out of the gates. The Golpeadors were brutalized until the (hot) expected comeback which featured an ill-advised fight through the crowd as well as stiff headshots because fuck everything at this point I suppose. Honestly, the entire thing was predictable yet great in execution. Only watch if you love that IWRG style of carnage.
Second, from La Nueva Era #14, Marvin and Epydemius put in for a borderline great hybrid affair that saw Ricky try as hard as he could to rip someone's fucking leg off of their body. It was glorious and well worth checking out. Fans of clean wrestling will love this and it serves as a complete opposite to the first pull.
In the three spot, we have the brothers at it again against Puma and Ciclon. Other than Aramis, I am expecting DB and Hijo to breakout real soon. If MLW truly wants to revive Lucha Underground they'd be great dudes to add in for sure. If you did watch the first match above, this kind of feels like a sequel in a way and I recommend it to fans of the wild west lucha genre. Early in, Bane is taken out via a series of chair blow to the legs leaving Lupus to fend for himself. It didn't last long and they blew straight to the runback spot which came off as comical. Yea, it was rough around the edges and the closing stretch was overdone, but it was still fun so consider it perhaps if you're bored enough. Russo wrote this, didn't he...
Impulso and Freelance are at it again next, with "gold" on the line this time. The blood flowed early and the action was tight and largely well done. If they could go back and clean up a few select spots here and there this would have been easily rated far higher but it is what it is. Bloody entertainment and a thumbs up, either way.
Closing the set, Villano III Jr is in action! The kid has really been growing as a worker and I hope more people outside of Mexico are taking note. He attacked as his opponent made his entrance in this one and kept punishing in a standard rudo manner, easily taking the first fall. The second started with him tossing a case of beer bottles at Centella, a tope suicida, and then a full set of chairs being flung. The circus was hot and I was on the edge of my seat the entire time. A true spectacle, this is one lucha match you're going to want to make sure to catch before writing 2020 as complete. Hopefully we get a rematch soon!
Red's Reviews Wrestling