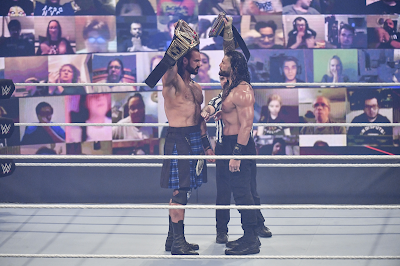 Ten from WWE for November. Honestly, I'm surprised by the amount of matches that looked worthwhile for the month, but lets just dig in and see if they were worth the time.

Bayley and Banks had a fun feud last year and I watched a decent portion of it. Basic but well done and the work rate made it well worth the time. They ended things with a recommendable blowoff title match that saw Sasha take the big W by the end. Great stuff in all and a good way to kick this collection off.

Mustafa and Ricochet, two of the most talented dudes that WWE has failed to use properly, up next. Mustafa is sadly attached to the train wreck unit of CAW looking assholes. Talented folk, but there's no way to save the gimmick. Anyway, caring about WWE plots at this point to the point of being upset is idiotic. This match was fun at least, and the right dude won.

No holds barred stuff with Seth and Rey in the three spot. Honestly, it was a good match with story work being a major part of it. Murphy turned of Rollins late which set up a funny botch with Mysterio missing the 619. While not recommendation levels, it was okay for what it was and I'm sure those attached to the story enjoyed it. Blowoff.

Fourth, Hurt Business challenged The New Day for gold in a pretty good tag match that built up nicely. I still question separating Big E from the group. On the flip side, I am glad to see the members of Hurt Business having something to do, especially Cedric.

McIntyre and Orton had their own blowoff. Like Banks and Bayley, this was also a decent rivalry. They had a decent level of intensity throughout and closed things out nicely. McIntyre really deserves credit for how damn good he's been lately and honestly Orton, too.

Over to NXT, Rhea and Io....had their blowoff. Also...a good feud. Io is a name I was worried wouldn't be used to her full abilities in WWE but honestly she's being handled well. It has helped them gain some respect as they continue their transition towards adding NXT Japan to the lineup. The match was great and lived up to my expectations nicely. Rhea has really impressed me lately.

Bryan, the best United States born pro wrestler of all time lost to Jey Uso next. While they never hit that next level, it worked for what it was and the post was decently done.

The Survivor Series show featured Reigns and McIntyre battling it out for brand supremacy. Too bad Finn wasn't involved, but Vince cannot seem to decide what NXT is supposed to be so that brand was "punished" instead. Note that NXT being moved to USA as a hastily done reactionary move might not have equaled a lot of victories against Dynamite, but it has still done a good job of keeping AEW's numbers lower than what it would have been otherwise. Back to the match, though...McIntyre has been a solid brute of a champ for Raw and one of the few bright spots that brand had all year. Roman has been one of the hottest acts in the game since returning thanks to his approach to being heel and even when the matches haven't been excellent from a work stance they've remained can't miss from an emotional aspect. While the production was more annoying than usual and the finish was way overdone, I still found this to be truly fantastic stuff. It felt like a big match and until the last minute was treated as such. Catch this if you missed out.

Closing the set, a ladder match for WarGames advantage. The finish was fucked but I still had a lot of fun. For a TV ladder match that is meant to be just a building block towards a different match, this more than worked. Borderline great and very little to bitch about.

Loads of stuff in November worth seeing, it seems. And I got to see it without dealing with the many, many, many hours of bullshit along the way.