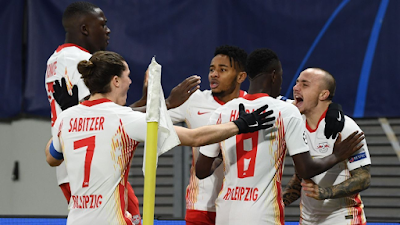 We're changing up the format of this series, going for something closer to my original vision. We're kicking things off with a look at this year's RB Leipzig club and their run thus far, especially in regards to this past week of excitement.
RB Leipzig are currently splitting duties between league play in the Bundesliga and tournament play in the UEFA Champions League alongside the domestic DFB-Pokal cup games.

In the Bundesliga, they currently sit tied at top with Bayern with 24 points with a 7-3-1 record.

In the Champions League, they just downed Manchester United to move to the illustrious knockout phase.

Their DFB-Pokal showing has been dominate so far, one game in, but it's the least important source of competition for the club, admittedly.

Honestly, things are looking great for the Saxony crew. Hell, one of the hottest players available just snubbed Arsenal and Milan to join up. The Hungarian, Szoboszlai, will be on board for five years.
The question is if they can step up and win the games that matter, in an attempt to finally take home a trophy of significance for the first time in team history.
This is the team that has the titans that are Bayern sweating. This is the team that gave Manchester United an existential crisis. They've outscored their opponents in the Bundesliga 23 to 9.
We are still just a few months in out of the starting gate, but you really have to feel good right about now if you're a fan of Die Roten Bullen and I think the odds are swinging in our favor!
Other Sports Red's RBI