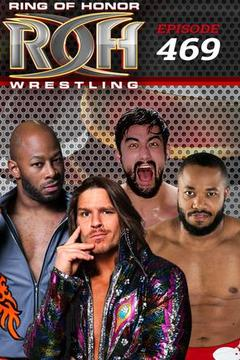 This was the first episode back to new content for ROH as they had done the right thing and shut down, while reportedly paying talent, for a majority of the year. I have heard that they also have one of the best COVID protocols in the game right now and, even though I still think it's too risky for wrestling to be happening right now in general, I at least appreciate the effort. Why no company seems to be doing a bubble, I have no idea. I can also applaud them for doing things that are annoying the dipshit, Flip Gordon!

Anyway, let's check out the episode before we get to the next roundup post.

This episode begins the tournament to crowd a new Pure Champion, and I have to admit that I love that they are bringing back that strap. While Lifeblood fizzled out and never became what I was hoping it'd be for the company, I will more than "settle" for this instead. It's arguably an upgrade, even.

Quinn breaks down the format of the tournament and gives some history to open us before we move to our first match; Jay Lethal versus Dalton Castle. I appreciate the tone of the episode right off the bat, including the orchestral backing track during the breakdown which to me really sold what they were aiming for.

I'll add that when I was writing down the match card above that I was surprised at the order. Dalton versus Jay sounds like a ROH main event and what we actually had as a main sounds more like a midcard contest.

Jay's package, which reminded me that he and Gresham are tag champs right now, was well done and had nice personal touches. Gresham of course got a spotlight too. Truly great production work. Their match felt important before the bell even rang because of them. On top of that, they both worked hard and made this a very good way to kick off the in-ring side of the episode. Castle was never the same after his injury but has moments that he shines and he really did look good here. I hope the time off equates to more of this being possible from him.

We then moved to more packages, this time of course for Yuta and Gresham. Once again, very nice stuff. I've been a fan of these two dudes for a while, one far longer than the other, going back to their CHIKARA days. Remember CHIKARA? Too bad Quack was a piece of shit. Also, during the main event they blurred out Gresham giving a middle finger. The Sinclair group has no problem enabling diet fascists and promoting distrust in the democratic process, but deem a middle finger offensive. Okay... The good news is that Gresham and the artist formerly known as Sylverhawk had a great match. While mileage may vary, know that if the you are a fan of technical wrestling you'll have a great time here.

I truly hope they keep this programming style moving forward for their show because this is a great way of ensuring that Ring of Honor truly feels different than the others. I'd also add that I see the episode before this featured flashback content with Cody and The Young Bucks and there were name drops in this episode for Cody. It could mean nothing, but I believe AEW has been reaching out to a lot of feds and I predict a supershow once the pandemic dies down a bit featuring NWA, ROH, IMPACT, AAA, and more. Am I wrong?  Do I deserve to be forced to wear a tinfoil hat? Likely. But there's enough proof that I could be right so lets wait on that.

For now, if you haven't watched this one, consider pulling the trigger!