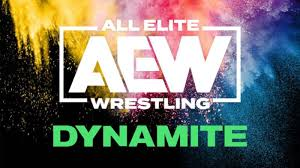 The Bucks superkicked a ref to start this one, leading into our opening match of the night. Note that I am watching this complete episode because there was strong buzz around it for a week with many claiming it was the best episode of wrestling television in years.

FTR and the Jurassic boys kicked this off on a heck of a high note, with a decent flow, tight action, and a decent amount of nearfall drama sprinkled in for good measure. Hell, the only real knock was the finish and it's not a big deal seeing as this was just a throwaway tag.

We go backstage and see Matt down, grasping his knee tight. Jericho and Hager mock him and ask the doctor if they'll need to amputate.

Kenny joins the commentary team for the next match, featuring Frankie Kazarian and Adam Page. I have to give props here because as good as these two are I had no expectations here and would never think of this as being a match I'd go out of my way to see. Fuck me, right? Omega makes it clear to the crew that he's going solo. Page was said to want to rekindle. Nice story touches as a result of Kenny's behavior during and after being added in and it is one of a thousand examples that shows how much thought and consideration goes into AEW's product and the depth there which makes WWE look more shallow than ever as a result. I will add that I really hope we get Kenny and Riho teaming more in the near future. Back to the match though, this was another match that on any other tv show would likely have been phoned in but here they both stepped up. Heck, most companies would have just had Adam Page roll over Frankie in a forgettable squash. Either way, add this to your watch list too if you missed it. Fantastic!

Post, we had a look detailing the main event build. Decent stuff.

Why does MJF's theme sound like something you'd hear while roaming during a jrpg? We start with an eye gouge on the jobber and it ends in seconds after. I am not huge on squashes, but for a dude like MJF it works. His post-match antics worked well and really the "match" was just meant to serve as a lead in to a promo. He's a decent worker, great talker. This segment played to those strengths for sure. Has he actually started a faction, though? I see nothing on Cagematch suggesting he's formed one and I don't remember seeing anything.

Taz breaks down his agent, Ricky Starks, in a sports style package. These ongoing spots are fun for sure.

Eddie Kingston and his crew (Lucha Bros, Butcher & Blade) in ring for another mic moment next. Kingston calls the group a family, not a faction or stable. A family of violence. Agents of chaos. I loved this and I love this...family. They don't seem to have a name, but I suggest Cagematch list them as Eddie's Family. It ends with Kingston telling Blade to get his house in order.

Match four has the qanon crew taking on the inconsistent but always entertaining duo of Private Party. The flow and tone worked nicely and I appreciated the lean into the underdog pick. Hager using a bat midway was a nice way to add drama without overdoing it and the heels taking the lead after worked nicely to build toward the finishing stretch. In all, this was very good and borderline great really. I especially loved the way the Judas Effect was sold. This too was worth seeing.

Quick props to JR. He is more inconsistent than Private Party, but he wasn't terrible tonight. Not great, but not terrible. I'll take it.

The semi saw Ivelisse, a worker I have been waiting to see breakout since her amazing run in Lucha Underground, challenging Thunder Rosa (copy and paste what I said about Ivelisse here) for the NWA Women's Championship. I really hope we see the NWA relationship continue and grow. I want Aldis coming out and requesting a match with Cody as soon as possible so that we can get another rematch. I appreciated that this was seen by many as borderline shoot at times and I loved the intensity added in general. You can tell those that were upset have never watched anything from outside the states, especially from Japan or Mexico. This was a very good battle and I think if we could teleport it back in time into the Temple that those fans would have been rabid.

I'll add that people were worried when COVID hit because it was going to reduce the depth of the women's division in AEW but I give them credit because I'd argue it's actually grown during this span in quality. Sure, I want Riho back and really want a big chunk of the TJP roster flown in, but that's not an option at the time. Can they get Kay?

We see a clip of Miro's debut next and then a segment with him, Kip, and Ford. The one that didn't speak was arguably the best worker in that span, though when Miro finds a groove and has the right opponent he can be great. I wonder how he'd do in All Japan or NOAH.

Archer murders, Snake talks. Jake suggests that Archer needs allies, similar to MJF earlier, and calls out Tazz. Cage, Archer, and Starks is interesting for sure. The only issue here was letting Lance talk at all, but it worked for the circumstance. In all, a solid segment and Tazz's boys attacking Mox to end it was a nice close. Oh, and Hobbs being involved was interesting for sure and makes it seem rather clear he might get a nice push sooner than later.

Main event time. Apparently Meltzer gave this five. I loved Santana and Ortiz's reference paint and give that five stars right off the bat. I am unsure how many WCW fans read this nor would even remember, but there was a rather fun parking lot brawl with Fit back in the day that I was reminded of immediately. Now, replace two men with four. Then, have those four be better workers (sorry, Fit) and have momma's pride on the line. There ya go. In no way can I say I consider this a perfect, five star match but I will say that it rocked. AEW's really perfected these types of matches and latched onto the spectacle that they provide nicely. And damn, this was a spectacle. Remember that scene in Liar Lair where Jim beats this shit out of himself? They did that level of damage to each other here. They've surpassed DDT in out-of-ring contests officially now, by the way. I rated this the same grade as the amazing Stadium Stampede war from months ago and strongly recommend everyone see this. If you've seen it already, watch it again just for fun.

My apologies if I at all come off as a fanboy here. Hopefully, return visitors here will note how harsh I've been on AEW and consider me fair in my opinions. And remember, these words are all opinions. I just know what I like and damn, this was indeed a fucking great episode of costume murder opera. It was basically a fucking filler episode yet was super entertaining. I was expecting a fun two hours but honestly I also expected that people had overhyped it a bit. That was especially expected since I have been told that I am a harsher rater than most. I don't know if that's true, but this lived up nicely to the hype and was truly better than not only most episodes of wrestling in recent history and hell, it was better than most ppv shows. If you enjoy spectacles and if you missed this, fix your mistake and find a way to watch ASAP.