The Rise & Fall of Ben Carter 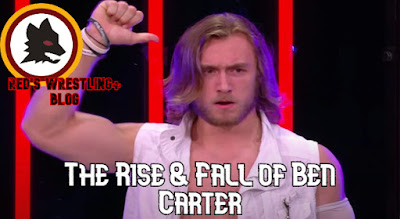 Sure, the title of this one is rather hyperbolic in nature I will grant you that but join me please as we take a look at one of the more interesting stories of 2020.

A few months ago, Ben Carter was brought to AEW for a trilogy of matches on their developmental show, Dark. Keep in mind that the brand has seen a wide variety of names come in to job to signed workers and a few have done well enough to earn contracts as a result of their performances. He came in and worked for free because his visa status wouldn't allow for any form of compensation. At least, not any compensation that wasn't under the table. Note that I am in no way suggesting Khan and crew did anything illegal. I am fairly certain some of the indies he worked for prior to the AEW shows did but I actually don't have a real issue with that, either. I mean, the guy was risking his livelihood and deserves something for his trouble. In the case of AEW, at the very least he got exposure. And not in the, "work for me boy and you'll get a hotdog, handshake, and maybe one of the five fans that are in attendance will stream it or something" kind of way. True exposure. I give Khan shit when he deserves it but AEW does a lot of things right too and exposure for up-and-comers is one of them.

After his second outing on Dark, a match against Lee Johnson, an outpouring of respect was sparked across the web and rave reviews were everywhere. Add another noteworthy match versus Scorpio Sky and you have a Cinderella moment. Though I had not watched his three AEW matches prior to writing this and I admittedly barely pay attention to the IWC, I was not blind to the fact that the dude had a fire burning. Eric Mutter, writer for Lucha Central, and I were fairly certain that he was going to be a big name in AEW sooner than later as a result. Instead, Vince Vince'd things up because he always has to have new toys for his shit covered toy box. AEW brought the kid in and he used the platform to showcase his abilities. He had created a demand. WWE is not one to allow a major rival keep someone that has that much potential so they of course reached out. IMPACT was interested and I am sure others, too. He truly was on the rise.

And then he took a deal with WWE to join their NXT UK brand.

How often do you hear about WWE's 5th brand? Furthermore, take a look at how often they take guys with a large amount of buzz and let it fizzle while turning them into just another wrestler. A generic CAW. And now, just two months later, no one is talking about Ben Carter other than myself and I am two months behind on everything still. I'm an exception not the rule.

Make no mistake, he is truly talented and has a very bright future ahead of him. Perhaps he'll even excel in NXT UK even if very few see it. Maybe he'll be a big star for Vince and win gold on Smackdown or maybe he'll leave in a few years and be a big star somewhere else. Again, he has the talent to do so and is just 22. I am not doubting his longterm future here but his immediate one.

I wish him the best. I just think he made the wrong call.

Check out my reviews of his Dark matches below and let me know if you agree or disagree, either here or on the various connected social media accounts.

Up first, his debut against Ricky Starks. Remember, at this time Starks was a fresh new face in AEW having just left NWA. While I don't consider RS to be a great worker, I do think he's pretty good and his mic work and general charisma should still be enough to make him a star in the states. He might get the card spot that Spears was hoping for yet keeps failing to truly grasp. Regardless, I think Carter shined more in this one for me and I sincerely thought this was one of my favorite debuts I've seen in a while. In under ten minutes, I saw loads of potential and it was a major reason why I wrote this whole thing to begin with.

Now, for the one that sparked the fire. It's a match featuring two young guys that are still relatively new to the game with literally nothing on the line on a show a lot of people ignore. Despite that last sentence being factual, they both stepped up big and came off looking like a million dollars in this fantastic sprint. In a way, it reminds me of the magic of Hiromu's first match with Dragon Lee and it sucks knowing I wont see a rematch anytime soon. Due to their respective contracts I must say I am pretty sure Johnson is more likely in line to be a big name quicker than Ben for the record. No matter what, for these ten minutes, we had a dose of magic and I suggest those that skipped it to take a sip.

Due to the work Ben had put in, he was apparently rewarded with a match on a special edition of Dynamite. Remember, Late Night Dynamite did pretty dang well in the ratings and had a major lead in so if the Lee match isn't what got him signed, it was this one. Miro announced shortly after that he had went to the "dark side" but at the very least we had a pretty good match with him and Scorp on television before his way over.

I know a lot of this post might have came off negative, so lets end on a bright note. In just about two years, Ben Carter worked for the modern version of WCW, got the world talking for a couple of weeks, and now works for the largest wrestling promotion in the world. While he might be getting back of the line treatment when he does debut for Vince's circus, I still think he has the talent to step above and out of the shadows and could be a major player. Remember, NXT UK was hit by the #SpeakingOut movement and with COVID also limiting travel between brands they need faces to round out the show. I wish Ben Carter nothing but the absolute best and hope in five years he's a world champion somewhere.