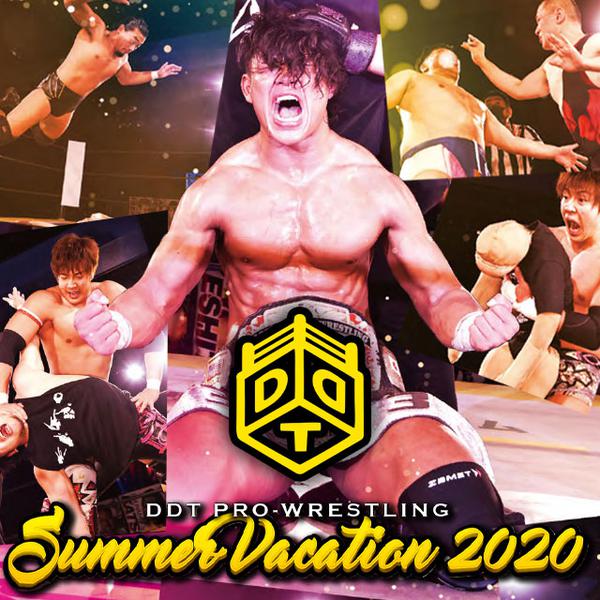 The first pull of the show was two on two tag team action featuring gaijins, Brookes and Parker, against Daisuke and Nobuhiro and for a throwaway it was fun and spirited. It also added to the Universal Title drama between the better two participants. Due to the manner in which I watched this show, making this the opener for me, I'd say it was a good one that kicked things off nicely but I wouldn't recommend running to see it as a standalone.

Post-match, Parker challenged his buddy to a shot at Brookes' strap.

Up next, Riho teamed up alongside HARASHIMA and Honda in an attempt to take down the ever growing threat that is Eruption in what was the first championship contest that I selected from the evening. Honda added some typical comedy moments but not to an offensive degree and Higuchi ragdolling Riho was a sight. Even more so, HARASHIMA and Higuchi's strike battle was worth seeing if nothing else. The tecnico trio worked well as expected but the champs were too much. Honestly, this was one that was enjoyable and had good moments but, like the first pull, I can't say it's recommendation levels.

The semi was selected solely to see Takeshita, Jun, and Shunma if I'm being honest. This saw ALL OUT and Junretsu in atomico action and, like all good unit battles should be, it featured standout performances from the bigger names and moments the allowed everyone else to shine, too. Seeing the lesser members try to attack the leads just to be squashed was a fun addition. They made the throwaway builder feel more personal by doing the little things and it slowly climbed upward as the time trickled away. It was a 17 minute match that felt like half of that. They started with Takeshita and Akiyama in the ring alone and ended that way and everything between worked well for what it was. I'm sure many will say I over rated this one, but I thought it was great and that they surpassed my expectations nicely. Check this one out!

Watching this show once again reminds me of my desire to see a stronger relationship between AEW and DDT. I actually think it'd be a far more beneficial deal for both parties to be involved in an exchange than one between AEW and New Japan. Just saying.

Tetsuya Endo has really become one of my favorite workers and I feel he's truly stepped up since winning the KO-D Openweight Championship that first time and I am very excited to see what this reign holds. In many ways, this was DDT's version of running Kento versus Jake Lee in All Japan for those more familiar with that brand than this one. Or, perhaps more accurately, flash back a couple of years and think of Kenou against Kaito. The dickish rouge that is Endo showed his natural charisma throughout in a way that made Ueno look outclassed and I say that as a guy that thinks Ueno is very talented. Regardless, it was a great defense but I feel the two could have done a bit better even than they did. I am sure the next defense will be worth seeing even if my expectations get in the way at times.

In all, this was a fun watch like most things involving this roster even if it sounds like I complained as much as I praised. Give it a look if you have a chance and missed it back in July.