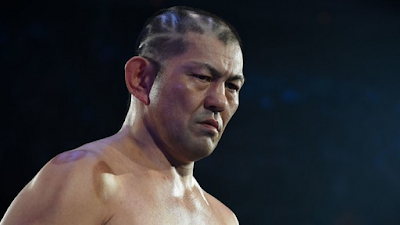 Our first match actually comes one day earlier than the last match of the first part of this collection by error. Oh well, not a big deal. With the aftermath of the Speaking Out Movement, which I still think needs to come around for round two, IMPACT set up a five-man elimination battle for their top prize. The inclusion of some of these guys in the match is a tad surprising but I barely follow this show these days so maybe it makes more sense to regular viewers. Why does EY look as if he's aged a lot since leaving WWE? The dynamic here was interesting, with the flyers adding (mostly) smooth sections alongside some harder hitting stuff from the likes of Edwards. The most I asked for was a good flow and a chance for everyone to shine and they largely did that. Overall, this was pretty good stuff and I think the right person won. It reminded me a bit of a torneo cibernetico in a good way. Yes, different stip obviously, but the in-out style mixed with eliminations and a decent final two sequence (which could have been a bit longer).... Props to Eddie for the #BLM patch, by the way.

The second match of this set had a lot of potential. Sadly, they included far too much bullshit and the ending in general was trash. Oh well.

Up second, Dolph got his ass kicked by Drew in a very good hardcore match. This one was a lot of fun! Note that the best way to watch WWE is with music on, blocking out the commentators. It doesn't help with the ADHD production issues, though.

Over to AEW, Cody and Eddie Kingston put in a nights work. I love the AEW effect. For those not in the know, the AEW effect is a broad summary of how All Elite Wrestling existing and how it has changed things, especially in regards to WWE. Talents are being paid loads more just to stay and others that had been killing it for years are now being called by WWE despite the company showing no interest prior to their Dynamite debuts. I digress, though. That promo prior rocked. Not his best and far from it, but it was raw and it was his first on such a big stage so props. This encounter also provided a chance to hear the Four Pillars mentioned on US television! Now, usually a tweaked knee early on is a bad sign but here it was far from a handicap. Instead, I'd argue it added to the match here. Both men worked hard and in all this was a great hardcore match that is well worth seeing. I sincerely am thankful that Eddie is finally getting a break and I hope he gets every chance to shine moving forward!

The Young Bucks took on Butcher & The Blade next in a great spotfest that kept the trend of fun AEW gimmick matches going. Perhaps the most important part is how much fun both teams appeared to be having throughout and it helped push this into something truly enjoyable. A spectacle that I recommend for sure. (That crash and burn.......)

EVIL's first (and sole successful) defense of the double gold was against junior ace, Hiromu. Following the underwhelming match in which he won the straps, even with HT, I was super low baring this one heading in. That said, despite the bullshit added on, this was a great match with strong work throughout and some decent story building along the way. EVIL can be hit or miss and has been that way for a while but this deserves a look.

Next up, a battle of Violent Giants for the one and only Triple Crown Championship. While this didn't hit that next gear that you usually want from an AJPW main event, the action was still worth seeing and the two put out bursts of energy that kept things moving along decently. In all, very good stuff!

Back to AEW, with two matches that were taped in July and aired on the August 5th installment.

The first match was a 12-man and it was nonstop. I know many will likely write it off as a mindless spotfest, but I strongly disagree. Hell, the sheer amount of talent it takes to get something like this to flow so carelessly while adding in touches of story throughout is off the charts. Clusterfucks can be tricky, but this was truly great.

The second saw Darby continue to be built up as AEW's Jeff Hardy against my current wrestler of the year, Mox. I say that in a good way because, once WWE figured out what they had with Jeff they finally started using him in a way that was pretty entertaining. Anyway, the two used the David vs Goliath method to sell the underdog story. If you remember Darby's breakout match against Ethan Page in EVOLVE, you'll remember that Allin has made himself a star of the style and he proved once again here that he truly is a huge star in the making. There was strong story work here and it was a great match in general.

Lastly, a Suzuki and Nagata rematch. In a war of elder titans, this felt like a better version of the Suwama/Shuji affair listed above. Dramatic strike after dramatic strike, sending sweat flying through the air after many of the blows; Minoru and Nagata truly shined here. If you enjoyed their New Japan Cup battle, make time for this one, too!

STARDOM and DDT content is next before I move on to August. Remember, anger makes you easily manipulated and weaker overall. Find your peace!