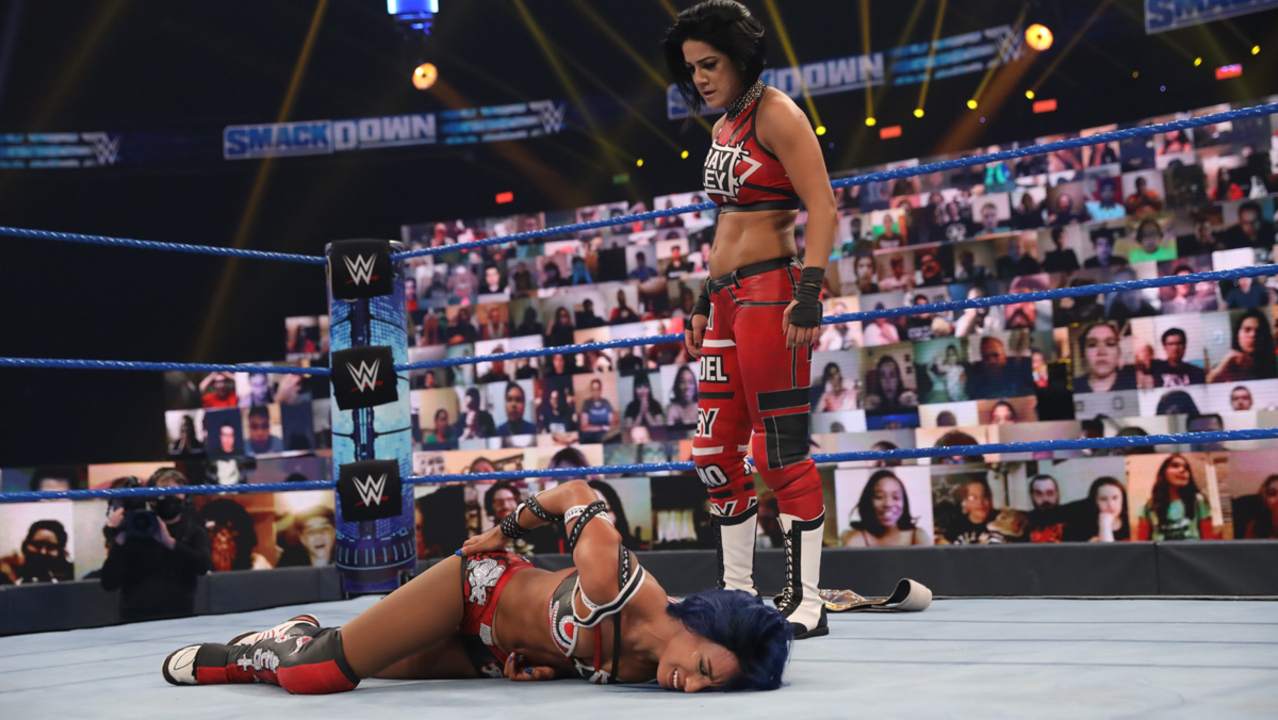 My kids and I were watching stuff on Hulu and this came on. I was going to change it but the little ones wanted to watch. I'm pretty sure I saw this getting a lot of good reviews anyway so why not. Maybe WWE actually did a rare thing and put on a good show.

The show started with a clip from Payback. Apparently Roman is back, is champ, and is being managed by Paul. I guess Reigns magically is no longer at risk of COVID? Yea, I have no idea what's going on there...

Since this is WWE, of course we then head to an in-ring talking moment. At least it's Paul speaking. The Thunderdome looks awful. They should have done what the NBA is doing. Looks far better. The segment was actually well done by the way. I figured I'd have to turn it off because the kiddos would lose interest. Somehow, Paul instead did a good enough job that even my kids were glued to it and Reigns just staring at the screen as he spoke worked well.

Otis is the MITB holder? What the hell is going on in WWE these days? That's my sole takeaway here. My kids loved it. I think it was super average. I honestly think Heavy Machinery is super average in general. Morrison stole the briefcase after...Later in the night they revealed that the contract was in a lunch box. My kiddos loved that bait and switch. This experience is reminding me that WWE really loves appealing to kids and there is a chance you'll see more WWE reviews in the future since they might ask for more. Usually, they just watch select content.

Has Big E slimmed down? Woods has apparently been out. The attack from Sheamus was decent. Nothing major and certainly nothing that hasn't been done a thousand times. It set up a change to the main event later. The Irishman's promo after was average at best.

Bayley and Banks interview. Decent. Why the hell is the dangerous, botch queen one half of the company women's tag champs?

Adam Pearce sighting. Paul asks to speak with him.

The second match featured Bayley and Banks against Shayna and Nia and, thanks to them limiting Jax, was actually a fairly good contest. Banks was the star here, which is no surprise. Everyone did a decent job in their roles. The production during Bayley's attack was especially awful, sadly. It was a great turn at least though I question having two ER spots in one show.

Next, we get highlights and a segment over the Intercontinental belt. The thing looks pretty okay but very similar to the Lucha Underground belt so of course I like it. I still think the attitude era version was the best looking take on the title. Sami is apparently back which is a plus. This was decent overall but nothing major. It's WWE so of course there is always a lot of talking.

The main event started with Corbin and Riddle brawling before the bell and then Sheamus and Uso joining in on the fun. Firefly Fun House interrupted things with Bray simply saying a new friend was coming. Bliss and Cross had a moment backstage after that I have no idea what the context was. I think I saw a random puppet in the background. Likely something to do with Wyatt. I have no idea where Jimmy is but I'll presume he is injured.

Back to the match, with the bell officially starting things up, the four went to work. A reminder that Baron is one of the most average workers I've ever seen get pushed. Far more importantly, Riddle is facing heavy allegations. He also once "joked" that weed keeps him from beating his children. What a nice dude. Anyway, this was good. I hate the production style of the company and cannot understate that. Fucks with my equilibrium issues. We don't need sixteen angle switches in ten seconds or camera shakes every time Sheamus hits a dude tied up in the ropes. But yea, this was formulaic but fairly good which is logical since WWE has actually a decent track record with fatal four-ways. The outcome was a decent surprise, too.

A quick reminder, WWE isn't going to change just because we stop watching. I used to think that was true but the fact is ratings keep hitting new lows and yet.... WWE is WWE because VKM is VKM. We need to accept it for what it is. Most of the time, it's several hours of phoned in, brain dead entertainment ran by a sexist, racist, pig with a truly good match sprinkled in from time to time. That said, they are home to some truly great workers that, when allowed to work, are still worth your praise. Don't think I'm planning on watching full episodes of WWE programming regularly, and I'm going to call shit out every time I can because I am going to call shit out on any promotion, but I do want to give credit where it's due since this was a good episode. Not great, and nothing worth recommending, but good. Also, note that I wasn't intending to watch anything recent until I caught up, regardless of what it was. I'll be back to June coverage soon. If the kids ask for another I might cover it. No promises.