AEW Fight for the Fallen Review 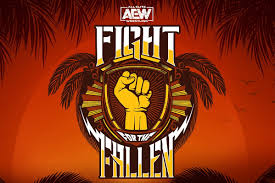 I continue to work through July. B/R had the episode so lets take a look.

It was nice seeing Kiss get a title shot. Cody's reign has had issue for me but I appreciate it for what it is. They worked a solid tv title match and both came out looking good as a result. Oh, and the extended intro that Sonny had was glorious and I loved the way they both embraced post. JR was a chore and continues to misgender Sonny.

I really fucking miss Lucha Underground by the way.

Speaking of, the Lucha Bros worked a pretty good two spot against FTR. It felt a bit off at times and the finish was just a builder, but it was still pretty fun stuff. Post, they had another moment between FTR and Omega.

Jericho's promo was okay and the Orange stuff with orange juice falling on the Inner Circle was childish entertainment. In a good way. We all need cheap laughs from time to time. Chris complained the rest of the night and Excalibur had fun with it.

There were a lot of things I could nitpick from the next match, but honestly I had a good time and I thought it was fantastic. I especially loved Kenny's cleaner teases post-match. Check this one out for sure if you missed it.

Mox with a solid promo.

The women's tag was just a squash. I still don't think they know what to do with Brandi but this is at least better than what they had going. Move along.

They advertised the actions figures that no one can find.

Nyla came out and revealed her manager to be Vickie Guerrero. Interesting move.

Main event time! The bad news is this is below recommendation levels but it was a more than serviceable contest and both men came off well. Speaking of, I was calculating my wrestler of the year list at the moment using the system I use based off of my recommendation list. This year is fucking weird. Mox, a very good worker, a guy I like, and a dude that has done well as champ, is my co-leader right now. Dickbag Ospreay, my winner last year, is tied with him. I am curious to see if he maintains the spot.

Darby with a hot run in to fade things out.

All in, Fight for the Fallen was a good watch and the talent worked hard to make it feel special.