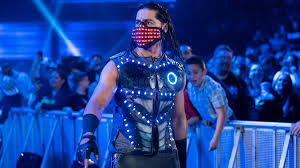 My daughter wanted to see what happened next with Sasha. I realized we could watch Main Event and that it was a decent choice for two big reasons. First, it's a short show. Second, the format should work well for her. WWE truly is targeted towards kids and this should make for the easiest way to slog through. I also figured this opens up the idea of letting me add her thoughts a bit to things here, which is kind of fun.

The first match was short but below average. My daughter liked it okay but only because it had girls in it. That's all there is to say about it and it doesn't deserve more time than that.

We head to a clip from Smackdown looking at the Uso/Reigns drama. It's a decent angle and I think Paul and Roman make a good pair.

We move to Raw for the Mysterio family issues with Seth. They did a solid job clipping it. I told people that one of the biggest reasons that Rey returned was because he was promised certain things. His son being fast tracked was one. He looks like he's learning and should be a decent underdog dude, but I really doubt he ever reaches his dad's heights if I can be blunt. To be fair, his dad is a legend. Murphy is one of WWE's top names and is just being used as a fall guy and Seth's bitch.

The other match of the night was actually a fun one. I thought I had seen recently that Ali was supposed to get a push but I see him heeling it up on Main Event instead. Oh well. They worked their roles nicely and this was good stuff. My kid loved Ali and was very excited he won.

Back to Smackdown, Bayley cut a promo. It was okay. My kid thinks Bayley is being turned bad because she's under control by someone bad. I suppose Vince fits that role.

Closing the episode, we see Keith Lee (rocking BLM on his attire) being moved into a program with McIntyre which is cool. It feels like we're seeing loads of backstage brawls and such on this episode, but WWE is rather unoriginal and uses a lot of those. All was good but this ended with Retribution chaos. The camera work during it was absolute trash and whomever directed it should be fired by cannon into the sun. Apparently Vince is still lumping minorities together, too.

In all, this was what it is. I will never watch these with huge expectations, but my kid enjoyed the format like I thought and the Mustafa match was enjoyable. This week's episode will likely be reviewed tomorrow and I will have a review for some We are STARDOM and AEW stuff up soon, too.