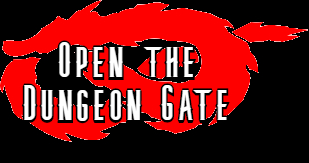 Welcome to Open the Dungeon Gate #0. I will detail the basics of the world that the main campaign will be set in as well as additional information that I felt was worth listing. Note that I will have a few different campaigns and some one off entries as the series continues, though most will take place in this setting.

Now, first of all, know that the adventures detailed in the entries will all take place in or around Cyr, a melting pot Kingdom that is on the brink of war with itself. The adventures will be a mixed bag of completely original content alongside the usage of premade modules that I've made edits to. Most of the posts will be mostly text based, written in a mixed format as I see fit. The bigger campaigns will take place via Roll20 or a contemporary and I'll post some screens or video from those.

This ties in with the short story entries on Night Dagger, for the record.

Cyr is a rather large area and takes up a majority of the continent of Mern on the planet Xarv'inX. The population demographics here showcase a high level of diversity, but racial tensions are one of the biggest issues facing Cyr. Another is that many divides have cracked the fabric of the land and civil war seems possible. In nearly the exact middle of Cyr is the capital, which is appropriately named, Capital City.

The land is ruled by an elected official, an elf named, Tornilius Cercum. Long ago they had kings, the name of Kingdom has remained part of the official name of the country, and Cercum would love to return that. He has brought heavy levels of corruption to Cyr and has a history of bigoted statements toward dwarf-kind and mixed races. There are four states within Cyr, each being decent in scale and each rather unique. Each has it's own representative as part of the Cyrian Government Council.

The rest of the world will be detailed in future posts. I'll mainly be using Dungeons and Dragons (3.5 and 5th eds depending on the situation) along with Pathfinder at times. Some stories will be largely self contained while others part of an overreaching story.

The first official episode should be up soon, though I do have a move coming up.