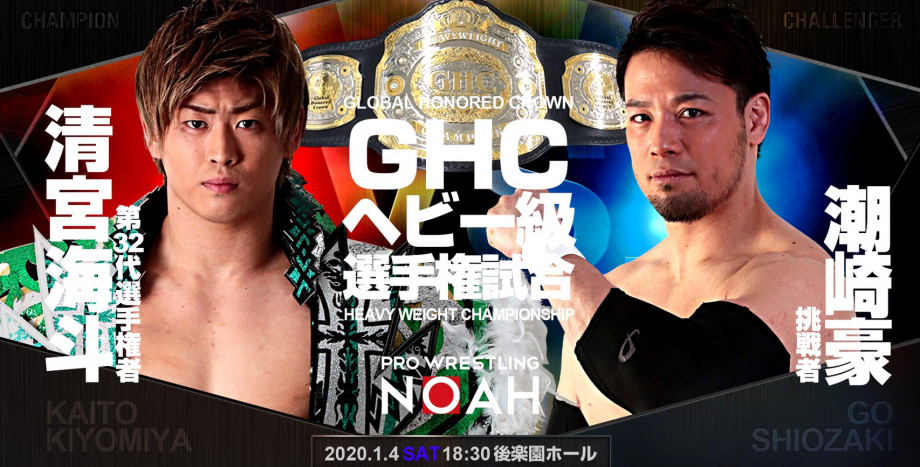 Thoughts:
Time to check out how NOAH started the year. In 2019, they were once again one of my top ten feds and had a revived spirit about them. Not since before the Suzuki-gun drama had they been this fun, and I was hoping that'd carry over into 2020. I was so excited, I ended up watching the whole damn show.

The dads match opener was okay and about what you'd expect from the dudes at this stage. Perfectly average, short and inoffensive stuff.

The junior tag follow up was humorous at times and, while far from being legit worth seeing, it was also short and as a result fine for what it was. I did expect a bit more heat though with the Global Jr League starting up and all but there were glimpses and the final minute or so was good.

Up next, we get the latest Hijo match. I'm a fan of his dad and have seen signs of true potential in this dude for a while but was fearful of how a NOAH tour would work out. I was mistaken. He hasn't been amazing or anything, but I've seen a lot of growth during his outings and am more excited about his future now than I ever was before. He was the star here for the first half and the Harada/Ohara stretch was pretty fun, too. Very good tag.

Next, Kenou refuse to work with Kinya and literally dragging him to the corner to force Hideki to tag in. It ended with a knockout kick from Kenou to Kinya, making a strong statement. Everything in between was very enjoyable and the whole thing was very good. I love the attack after from Hideki and hope we get some singles matches soon as seemingly teased. Borderline great contest.

A rare Douglas Williams sighting! In all, this was another fun tag match and a tad different than everything else. I'm assuming Williams is on a mini-tour and I missed it? Sign me up.

Hoss versus kicky asshole. Elgin fits well in NOAH and continues to impress when brought in. Naka is a glorious dick and one of my favorites on the roster. Great stuff and I look forward to where both go next as we push forward.

The new red colored heel duo met the Jr Tag Champs next in a high speed tag encounter. A few creative sequences mixed in helped ensure entertainment throughout, even if the execution was off a tad, and it was another very enjoyable match from the show. While few things on the card have hit that next level, it's been consistently recommendable at the same time.

Leveled match for the singles Jr strap next, as much of Ogawa's work is, with a surprising outcome. It was a smart hybrid match and a cool moment for the elder worker, winning his first GHC Junior Heavyweight Championship. Interesting move to say the least, though I don't expect much of a reign. For fans of technical encounters.

New championships first, and most importantly, need proper definition of worth and general purpose. The GHC National Championship has a strong inaugural owner yet is still a fresh couple of pounds of leather and gold right now and as such lacks that definition I think it's still trying to find. Is it just a secondary title for when they don't know what to do with you but know you shouldn't be too low on the card nor the Heavyweight Champ? Is it an equal, like how the IWGP Intercontinental belt is treated now? The signs are starting to point to the latter, but in the meantime at least we are getting some fun matches revolving it. Here, the champ and Masa put in for a fantastic showing worth checking out.

The Kaito project was a success, and I love the elevation story all the way back to him being murdered by Kenou upon return from excursion. His reign as GHC Heavyweight Champ provided for several high quality defenses and moments but nothing lasts forever. Go, one of my favorite roster members, isn't the guy I figured would end the run but I see merit in doing so and a short, but solid run right now from him should help elevate whomever they push next. The match was the first MOTYC from NOAH and I expect many more. Heart and determination, and a match deserving of the NOAH brand, this is well worth your time!

Most of the show was very good, nothing was truly bad, and the last two stepped up big. New Sunrise was a great show and a strong start not only providing for a nice night of wrestling but also setting the stage nicely for future shows. Expect some select match reviews from NOAH soon but, in the meantime, check this one out!