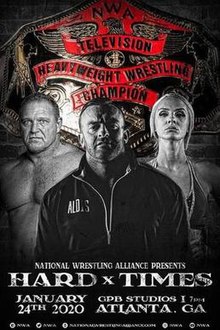 On January 24th, NWA will present Hard Times. The show serves as a new chapter in NWA, and an exciting one. ROH has already done a lot of smart moves this year and I'm, for the first time in a while, excited about their future. NWA, having dropped them prior to the debut of Powerrr, made a statement when they revived the partnership a few weeks back and it's already making a mark.

So, let's take a look at the show and dig in a bit.

CARD & PREDICTIONS
1.ROH vs NWA: Aldis vs Flip
With the ten pounds not being on the line, unless they change that now and were only holding off to avoid giving away the outcome of the Morton defense, I think we might see a surprise victory here. It's still a long shot and would likely see Scurll interfere, but it's still a possibility and one that would paint an interesting picture moving forward. We'll have to wait and see, but this match should be the best of the night and I smell some huge angles being set up, too.

2.NWA World Tag Titles: Rock n Roll Express(c) vs Wild Cards vs Storm, Drake
The Rock n Roll Express reign has been a nice, crowd pleasing moment. That said, I think the Wild Cards get the belts back to later be used in the pending VE/Strictly Business angle. Storm and Drake should be a fun duo that I hope are used a lot in season three, and eventually win the belts. It should be a slow burn play, maybe even a year or more down the line, but a turn from either Storm and Drake once built up properly as a team would be a huge move. Food for thought.

3.NWA World Women's Title: Kay(c) vs Thunder Rosa
I've been enjoying what they're doing with this division and the idea of Thunder Rosa holding NWA gold sounds like a fun move. I like Allysin, too but think Rosa would be a better champ and a better choice with the ongoing story they're pushing. This could be a fairly good contest but it's one I'm more torn on that any of the others.

4.NWA National Title: Stevens(c) vs Steiner
Wow. Stevens is okay but not someone I care much for. Steiner is fun but can be a bit of a trainwreck in multiple ways. I don't see them bringing the mathematician in to fall here, so expect a new champ in an...interesting contest.

5.NWA World TV Title Tournament
-Tim Storm vs Anderson
-Starks vs Cross
-Dice vs Maff
-Question Mark vs Murdoch
So, the additions of Cross and Maff are awesome. To break things down, I see the first round matches will end with Storm, Starks, Madd, and Murdoch winning. Colt will cost Anderson, Starks will work a solid one and win clean against Matt, Maff will murder Dice (if there's a god), and Question Mark will fall due to Stevens. That last one is the biggest...question mark for me. I just really like the idea of Maff and Murdoch in the second round. The finals should be Tim Storm versus either Murdoch or Maff, with Storm taking the belt. Either way, I don't expect most of these to be barn burners, but this could be a solid, one nighter.

So, what are your thoughts and predictions? Let me know.
Red's Reviews Wrestling