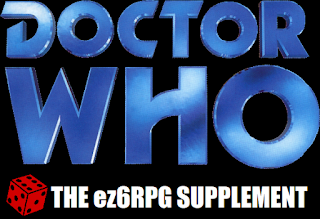 For the basic ez6RPG rules, click here. Expanding on that, here is the first official supplement for the system. I made the original rules so that I could start introducing the concept of tabletop roleplaying games to my kids in a structured way that allowed for a skeleton while also keeping things fun and loose. This specific addition is due to a desire to get another family member playing with myself and my brother in law. I hope it's something that someone finds useful.

WHAT YOU NEED
This system is about as easy as it gets and you literally just need a standard, six-sided die (or a few so no one needs to share), some paper and a writing utensil, and however many players you can get. You need at least two people unless you are wanting to essentially test this out solo.

CORE RULE
The core rule of ez6RPG is that any challenge a player faces typically requires you to role a d6. If you role a 4 or higher, you succeed. There are additional rules you can add on that I mention later here if you want more crunch including how CR's (Challenge Ratings) works in this game.

PLAYER ROLES
The Game Manager (GM) is the ref, guiding the story and players along and ensuring everyone is having a great time within the easy rules that ez6RPG provides. The rest of the players are the protagonists, or Player Characters (PC's). Be creative, have fun, don't be a dick. That goes for both roles.

MAKING A CHARACTER
On your character sheet (I tend to use flashcards for this system), write the name and general background of your character. If you want to use an existing character from the show, check the further down of this supplement for some options on builds.

If you are wanting to use the basic rules, the only stats you'll need to keep track of are the Core Two. That is the term for HP (Hit Points) and ATK (Attack). You have ten points to share among those two stats as you wish.

Expanded rule options are also near the end of this supplement.

CHALLENGES
Games need challenges. The core rule above explains how to resolve them in quick order. An added level of difficulty comes in the form of CR's. The GM can take into consideration your background and the current situation and assign a CR to a challenge. For example, let's say you have a companion that is good at tech and must hack into a computer to help the Doctor. If they have a bit of experience but not much, they could suggest a CR of 2. That would require the player to succeed twice with the core rule. The highest CR I'd recommend is 4. That'd be if you were trying to jump a large distance with a broken leg or something equally hard. It's up to the GM on how harsh they'd like to be.

COMBAT
Sometimes, combat is inevitable. That's true even in Doctor Who. To resolve combat, you start with determining order. This is achieved by having all the participants in the conflict rolling a d6. The higher the number, the sooner you go. You can roll again for tiebreakers.

Consider surprise rounds, where only the one(s) with the advantage go the first turn. Also, consider adding a CR depending on the situation, such as if an enemy has cover as combat in this game is rather lethal and, of course, should be avoided when at all possible already. Using cover to add a CR can help.

If you succeed at the core rule during your turn at an attack, take your ATK stat # off of the target's HP. If they hit 0 or below, they are defeated.

Note that it might be best to use a grid for combat but you can just as easily opt out of that option. I would suggest considering using a speed stat, as listed later in this supplement.

RULE OF RANDOM
For added fun, I've added the Rule of Random for this supplement. Doctor Who adventures are even more fun with their twists and turns, aren't they? And adding that feel to the game should provide for additional entertainment and can take an adventure and move the story in a brand new direction with these plot concepts.

So, once a game (or more if you'd like), if a player rolls a specific number during an encounter, the GM is to draw a card from the Deck of Random and they get to choose when to implement what it says. I suggest making the deck from colorful flashcards or color coding everything using those types of cards.

Here's a few options:
1.The Psychic Paper fails
2.The TARDIS is missing
3.A lost Dalek controlling an army of warewolves
4.Santa elves are Cybermen
5.Torchwood agents appear
6.A cult worshiping Weeping Angels reveals themselves
7.Nazis have created a time machine and are spreading themselves across time
8.A mysterious device appears in the TARDIS
9.Someone claiming to be the resurrected Jesus arrives on Earth
10.Crossover Time! Roll a d6 and check the results against this chart for some options...
-1: Sliders
-2: DC or Marvel Comics
-3: Lost
-4: Rick and Morty
-5: Harry Potter
-6: Red Dwarf

ADDING ATTRIBUTES
Here are a few attribute stat options for the game and how to use them.

1.Athletics: Can your character scale a tightrope style challenge to make it out of a hairy situation alive? Take a chance on upgrading this stat to make it easier on yourself.

2.Awareness: Is there a weakness to your enemy? Perhaps something important that you almost missed on your adventure? Who knows, but adding a point or two to this stat should make it easier to find out.

3.Fighting: Care more about punching or shooting your enemy than talking to it? Fair enough. Maybe make your muscle-headed machine better at doing by opting to embrace Strength.

4.Science: This determines a player's knowledge of science and technology, including to and not limited to situations involving healing, general chemistry, and computers. If you choose to add points to this option, know that you should add some minor details to your background in regards to it to help make the CR identifying easier for a GM.

5.Charm: If you like the idea of trying to manipulate, sway, and convince those against you to take your stance, Charm is the way to go.

Want to add these? This is how to easily do so...

First, give players five points to give to the stats as they wish with the max allowed in each being five. When using these in challenge/combat situations, take whatever CR you would normally assign and subtract the applicable stat.

So, if you are needing to stabilize a hurt player? Check the Science stat. Want to see if a player can talk an enemy out of killing them? Charm is the stat to check. It's an easy way to add more customization to the game and you can feel free to mod this as you wish.

One additional stat I recommend is Speed (SPD). This determines how far a character can move in one turn. In combat especially this can be important, unless you're playing this much looser than some. To apply this, I use a grid system suggestion where SPD # equals how many squares they can move in a combat/challenge turn.

SONIC SCREWDRIVERS AND PSYCHIC PAPER
Along your adventure, you may find yourself using gadgets and the like. Here's some info on two very important items and some general stats on them. Consider either adding them to your own sheet or having a separate card for them (in case you lose them etc). Add any additional items of relevance in a similar manner.

Sonic Screwdriver
The swiss army wand of the Doctor can open, cut, seal, inform, and more. Keep in mind how useful the item is and consider nerfing it in select situations with a CR if needed. The game is about having fun AND the drama, too.

Psychic Paper
Need to sneak your way into an investigation? How about sneaking into a secret facility? Whatever the Doctor needs this little piece of paper to be is what it appears to be. Just remember, there are several examples of it not working like the Doctor expects...

THE TARDIS AND TIME TRAVEL
The TARDIS is perhaps the most wonderful part of Doctor Who and serves as a very important part of the overall story. Program a timeor place, and this beautiful time machine goes there. It essentially doubles as a bag of holding, making encumbrance issues essentially non-relevant. But, that said, it's not invincible. Consider giving an HP and CR to destroy it stats for some big bad with big ideas.

Remember, the TARDIS and time travel are meant to be plot devices and as such are loose constructs to be manipulated as deemed appropriate by a GM.

THE WHONIVERSE TEMPLATES
I'll presume anyone that has an interest in using this has some form of knowledge of the Doctor Who franchise. Here are a few templates to use, expand on, or just fine tune as you'd like to make the Whoniverse yours to jump in to.

General Doctor Stats
HP: 8
ATK: 2
ATH: 1
AWR: 1
FIT: 0
SCI: 1
CHM: 2
SPD: 2
Special Notes: The Doctor comes with a Sonic Screwdriver, Psychic Paper, and whatever else you'd like to give them as props and equipment. Some details on these is listed above. If a Doctor is killed in the line of action, remember they have a knack for regeneration...

General Companion Stats
HP: 6
ATK: 4
ATH: 0
AWR: 2
FIT: 1
SCI: 1
CHM: 1
SPD: 2
Special Notes: A good companion needs to be capable enough not to die immediately while also providing some risk of dying for the drama of it all. Equip them as needed and as fits your specific character.

Dalek Stats
HP: 6
ATK: 4
ATH: 0
AWR: 2
FIT: 0
SCI: 3
CHM: 0
SPD: 1 (3 when flying)
Special: Feat the Daleks, for they have an addition trait that makes them a constant risk. Their Dalekanium armor casing makes any attack roll against them an instant CR 3, requiring three successful roles of four or higher to score any damage. An alternative option would be to take whatever ATK is landed and take the # down by half.

REGENERATION AND PLAYER DEATH
Everything dies. That's the truest inevitability of life. As the GM, try not to TPK but also don't over-nerf things, either. Consider soap opera options for deaths and always remember, if a Doctor dies, regeneration is an easy option to keep a story going...

CLOSING REQUEST
So, I have a request of sorts. If you use this system, have thoughts in general on how bad or fun it is, or just want to ask a question...simply, take the time to let me know. I will post additional content for both this specific sourcebook, adding new things, and for the ez6RPG system itself. This includes modules and more.

Thanks for reading and have fun gaming!
Posted by Red at 8:48 AM