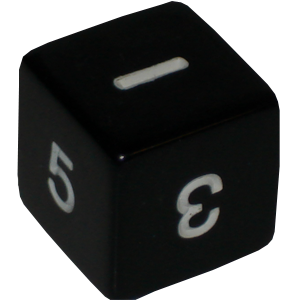 I have two kids, and I want them to have fun playing tabletop rpgs. As a result, I made this super simple game for us to play. I have more advanced rules made, too. I'll post those rules later for anyone interested. Either way, if you are seeking the easiest entry point for tabletop rpgs, this is it!

What You Need
-a single, six sided die (d6).
-pen and paper to keep track of stuff.
-at least two people.

Core Rule
Roll a d6. If you rolled a 4 or higher, that's a success. Anything lower is a failure.

Game Manager Duties
If you take the role of Game Manager (GM), you are responsible for making sure the players are having fun. You will be telling the general story, controlling any non-player characters and monsters (npcs), explaining events and happenings, and presenting challenges. You are the referee, and whatever you say goes. I'll post adventure paths for GM's later, by the way.

Player Duties
Your job as a player is to overcome challenges presented by the GM. You are the/an protagonist in the story.

Do you want to play as a superhero? How about a simple farmer? You can pick anything, and any setting. Do they have special abilities or limitations? Just write down their name and info, to ensure you remember. Add as much, or as little, as you'd like. I'll post some templates soon. Just make sure the GM approves all of your choices. The only stats to know about is ATK and HP. You have 10 points to share across the two stats as you'd like.

Challenges
When playing, you're going to have challenges to overcome and enemies to take down. Let's start with how challenges work. Remember, the core rule is always the answer. The GM will assign a Challenge Rating (CR) for these tasks.

For example, let's say you are a spy trying to hack into someone's computer. The GM might take into account your background, and set the CR as 2. That means you must succeed twice using the core rule. The GM might decide that you can try as many times as you'd like, or they might only give you two tries depending on the situation.

Combat
You will have a set attack (ATK) and health (HP). As noted above, you have 10 points to share across these stats. If you are in combat with someone/thing, you each take turns. To determine the order of combat, roll a d6. The higher roll goes first. Roll again for tiebreakers.

On your turn, if you choose to attack you follow the core rule. If you succeed, subtract your ATK score from their HP score.

If HP hits 0, or lower, the enemy is defeated.

Conclusion
I wanted to make the simplest game for newcomers, and this is it. This is the skeleton for any game you can imagine. Just remember, if you are the GM, make sure everyone is having a good time!
Tabletop RPGs