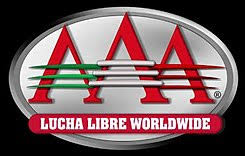 During this Sunday's AAA tapings on Twitch, it was mentioned that the Bucks and Cody should be appearing at this year's Verano de Escandalo event. It was suggested that the Young Bucks would be defending their belts, which could either be a spoiler for Double or Nothing or just a random statement that AAA is known for throwing out.

In other news, it seems that La Mascara is now done with AAA and is running as an independent. His feud with Maximo was the only real noteworthy thing he did during his run and, honestly, he never added much to the show. Texano and Rey Escorpion may or may not continue under the Mercanarios name and they may or may not remove the Ingobernables style logo from their gear. Don't expect to see him in CMLL anytime soon unless he has been forgiven for his antics that got him fired.

Remember to check out the lucha blog for more frequent lucha libre updates.